Validation in Europe presented at biennale 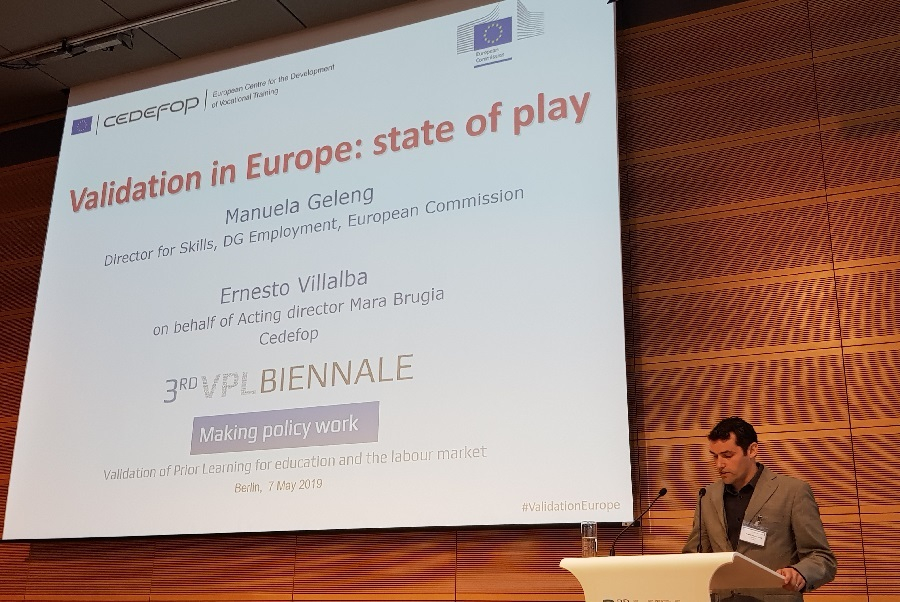 Cedefop contributed to the organisation of the 3rd Validation of prior learning biennale, in Berlin on 7 and 8 May. The event gathered 300 participants from 40 countries to discuss how to make policies on validation work.

Cedefop expert Ernesto Villalba shared the stage with European Commission’s Director for Skills Manuela Geleng in a keynote speech to present preliminary results of the 2018 update of the European inventory on validation of non-formal and informal learning. Cedefop will publish the update with the Commission and the European Training Foundation later this year. This edition features 39 country and six thematic reports, and three international case studies in addition to a synthesis report.

Ms Geleng emphasised validation's increasing importance in making all learning count, adding: ‘This is no longer just something nice to have. In today’s fast-changing labour markets and societies, it’s a must. Good validation arrangements can play a part in tackling some of Europe’s major challenges, from youth and long-term unemployment to skill gaps, from an ageing workforce to migration management.’

Mr Villalba presented preliminary results of the inventory which show that countries are progressing in developing strategies for establishing validation arrangements that work. However, further efforts are needed, especially in making validation more comprehensive and developing practitioners’ skills and competences.

The biennale, which was hosted by the Bertelsmann Foundation, adopted the Berlin Declaration on validation of prior learning by 92%. Participants discussed the document’s six tracks, focusing on specific aspects of validation: organisational arrangements, financing, methods and procedures, supporting structures, post-validation pathways and legal arrangements. A seventh track presented a selection of validation research and projects.

The declaration is meant as a grassroots push for stakeholders and policy-makers to make validation policies bolder, more effective and more inclusive.

In a video message, European Commissioner for Employment, Social Affairs, Skills and Labour Mobility Marianne Thyssen praised participants for their work, stating, in a reference to the famous Berlin International Film Festival: ‘You deserve the Golden Bear for validation!’

The next biennale will take place in Cape Town, South Africa, on 12-14 May 2021, and it will be hosted by the South African Qualifications Authority (SAQA).