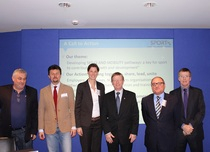 At a European Observatoire of Sport and Employment (EOSE) conference, at Wembley Stadium in London, Cedefop Director James Calleja proposed a joint activity on vocational education and training (VET) and mobility of the sport and active leisure sector and the international financial services sector based on a common model of governance to support the use of European tools and policies related to VET, skills and qualifications.

In his testimonial, Mr Calleja spoke about the 7-step model, which was finalised by EOSE in 2011. The seven steps to achieve quality in VET-related qualifications are: labour market intelligence, an occupational map, occupational descriptors, a functional map, a competence framework/occupational standards, a guide to qualifications and learning outcomes, and quality assurance processes.

The conference, on 24 and 25 February, was organised by EOSE’s VSPORT+ project, which is funded by the European Commission under the lifelong learning programme 2007-13.

Some 64 participants from 20 countries, including Olympic Games medallist Claudia Bokel and senior officials from SkillsActive Australia and SkillsActive Aotearoa New Zealand, had the opportunity to present latest activities and EU policy developments, some concrete national case studies, and to exchange views on the main education and training challenges the sector is currently facing as well as concrete opportunities and suggestions for the development of its workforce.

The Cedefop Director focused on the importance of standards in VET-related qualifications, which should fundamentally govern a sector in which qualifications are led by the governing bodies themselves; on mobility, which allows those working in the sectors to move from one region/country to another with recognised knowledge, skills and competences; on transparency as a tool which is today strengthened by the European processes the model uses, such as the EQF, ECVET, quality assurance standards in vocational training, Europass and others; and on employment, which the model aims to achieve.

‘At the end of the day, people need employment, recognition for their work and quality of life within well-defined structures and processes. In this context, the 7-step model is a valid tool, particularly in providing this sector with a European context, which may be easily exported to other regions of the world but also to other sectors, such as the financial sector which is also currently working on a similar model,’ added Mr Calleja.

He also stressed ‘the sectoral and global appeal of the model in the context of the economic crisis and youth unemployment’ and ‘how the sector can support people in becoming more employable.’