Economic and gender equality: are skills systems the answer?

At the same time, the improvement of EU skills systems is set out as a key priority for a fair and well-functioning labour market. In support of the implementation of the Pillar, Cedefop has developed the European Skills Index (ESI) which aims at monitoring the performance of Europe’s skills systems, while at the same time identifying areas calling for improvement. Cedefop has just launched the 2020 release of the index, which has extended its coverage to EU27 plus Norway, Switzerland, Iceland and the United Kingdom.

Three distinct areas of a skill system are examined; these of skills development, skills activation, and skills matching. As argued in a previous blog article, skills systems are complex and go beyond the traditional thinking of considering them merely as mechanisms of increasing the supply side through formal education. The institutional context, which influences the available supply in the system, as well as the matching of skills, as an outcome of the interaction between demand and supply, need also to be carefully considered. Such complexity is essential, not only to better understand how a skill system works, but also to explore its links with other important socioeconomic phenomena as the impact of a skill system goes well beyond the functions of a labour market. For instance, Figure 1 presents the relationship between the European Skills Index and the Gini Index. The latter is a measure of economic inequality, in terms of income distribution, with values ranging from 0 % (perfect equality) to 100% (perfect inequality). As for the ESI, its values range from 0 to 100 with higher values indicating a better performing skill system. 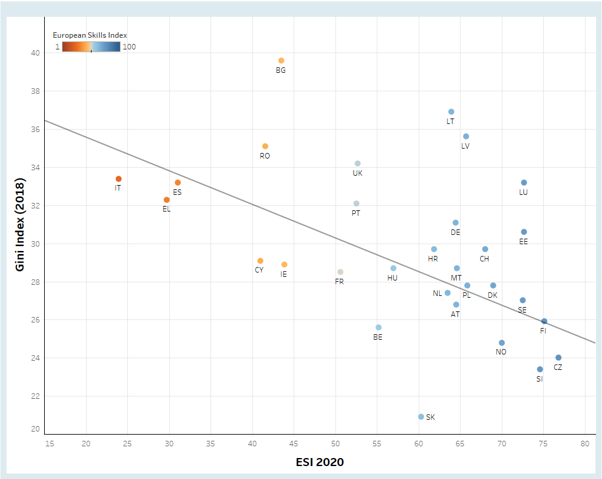 As can be seen from the figure above, there is a clear negative relationship between the two measures. Even though causality cannot be established, the main message is that better performing skills systems are associated with lesser economic inequality.  For instance, Czechia, which is the country with the highest score in the 2020 ESI, is also one with the most equal income distribution. Similar are the cases of Finland and Sweden. On the other hand, Greece, Italy and Spain are the countries with the lowest skill system performance which is also coupled with low scores in economic equality. Interestingly, Bulgaria and Romania have an even lower score in the Gini Index. Looking deeper into the ESI and grouping the dimensions of skills development and activation into that of skills formation (see past blog), we observe that Bulgaria and Romania are also among the countries with the lowest skills formation scores. This may serve to suggest that the level and composition of skills, as shaped by both the supply framework (skills development) and the institutional context (skills activation), are among the main factors behind rising inequalities. This is opposed to a prominent explanation in economics, suggesting that stretching income inequalities is a result of new technology shifts away from low-skilled towards high-educated workers, thus attributing inequalities to the changing patterns of the demand.

Nevertheless, a skill system is associated not only with income but also with gender equality. Figure 2 plots ESI against the Gender Equality Index, which explores six different areas of gender equality, examining equality not only in terms of the position of the genders in the economy, but also in terms of knowledge, time, power and health. A positive relationship is found between the two indices. For instance, Sweden, which has one of the highest ESI scores, also has the highest score in the Gender Equality Index. Sweden consists of a paradigmatic example of a country where the institutional structure aims at simplifying the combination of parenting and market work, stimulating women to participate in the labour market. In ESI terms, Sweden has the highest skills activation score. In other words, it can be made apparent that gender equality is achieved through a well-functioning and balanced skills system. 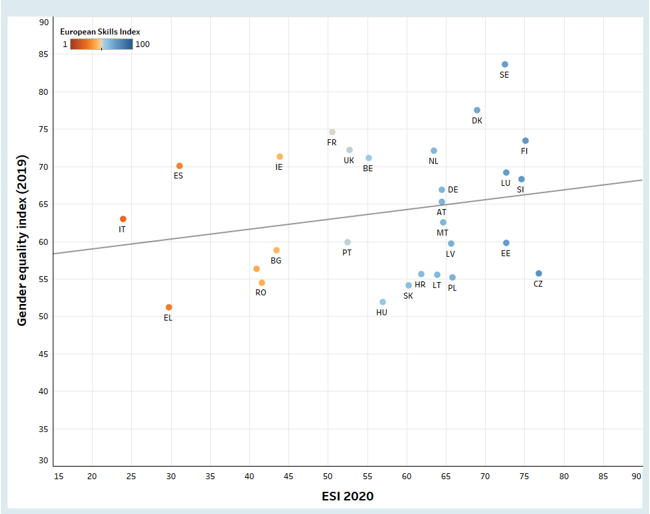 While being aware that the evidence presented is this blog article show correlations and not causations, it may be fair to suggest that supporting the construction of solid skills systems will facilitate bridging economic inequalities and narrowing of gaps between genders, thus coming closer to two key aims of the European Union. In other words, the role of a skill system is not limited to the economy and the labour market but has important socioeconomic extensions. Important questions are coming up and better skills systems may be the answer!

In developing a skill system, however, it must be ensured that important aspects, such as the institutional context set in place to activate skills, are not overlooked but particular importance is given to their operations. A holistic approach to skills systems, such that of the European Skills Index, is essential towards better understanding the areas in need of improvement.