The list below is based on an assessment of the labour market of Slovakia. The occupations presented are not given any rank. All of them present high mismatch. 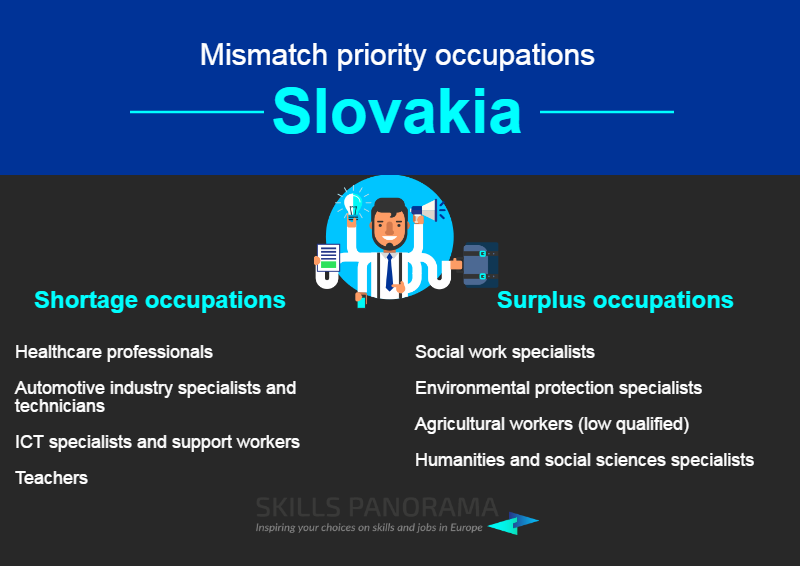 Similarly to other EU countries, Slovakia is facing increasing shortages of medical doctors and other health professionals, especially qualified nurses. Work emigration of professionally qualified Slovaks is felt in most sectors, but in medicine and health services in particular. Moreover, the average age of medical doctors has increased. Already, in some regions (e.g. Prešov) general physicians are sending warnings that they are serving beyond retirement age as no replacement is available. [2] The regional character of imbalance seems to be the core of the problem as the lack of doctors is reported as alarming in less developed regions of Slovakia whereas the region of Bratislava, the capital city, does not seem to experience the problem. [3] The root of the problem can be seen in two main factors: decreasing numbers of young people applying for medical universities (in 2007 there was a total of approx. seven thousand applicants for the group of HE programmes “Medical Sciences”, whereas only approx. four thousand applicants were reported for the same group in 2014, which, however, is also related to different number of schools opening these programmes in the respective years [4]), and the increase in the number of (especially young) doctors leaving Slovakia for better salaries and career prospects in Western Europe. As regards qualified nurses, the situation is even more challenging. Whereas in 2000, there were roughly seven nurses per one thousand citizens, in 2012 this dropped to six nurses (i.e. a 20% decrease in 12 years). [5] This is also significantly below the OECD average (almost nine nurses per one thousand inhabitants).

Slovak legislation contains a regulation that stipulates the minimum number of medical doctor positions of different specialisations that must be created within given each geographical area (so called Minimum Network of Medical Services Providers Regulation [6]). Currently, this regulation is met, i.e. no region or medical specialisation has come below the minimum number of functional positions. However, the regional distribution of medical care availability in Slovakia is not balanced. A lack of specialised doctors as well as the increasing age of general practitioners is felt and reported specifically from non-urban, rural areas such as Central and Eastern Slovakia. Regarding measures to tackle the shortage, the Slovak government has been increasing funds allocated to public health care, including doctor salaries. However, this is still considered insufficient by many. A specific measure has been introduced by the Ministry of Health recently – the “Resident Programme”. This is a measure focused on medical students in the final year of their studies (part Medics) and on bringing these students to regions to become general practitioners after their studies. The students, as well as the young residents (mentored by the general practitioners in the relevant regions), are eligible for a financial contribution during their involvement in the programme.

The automotive industry is the largest sector of the Slovak economy. In 2014, 970 thousand vehicles were manufactured in Slovakia. [8] The most important foreign investors in this sector are PSA Peugeot Citroen, Kia, Porsche and Volkswagen. It is generally observed that the automotive industry tends to generate networks of employment and business opportunities beyond the core manufacturing/ assembly facilities. It creates networks of parts suppliers, related services providers and other secondary sub-contractors. Therefore, the growth of the automotive industry in the last 10 years has driven higher demand for a qualified workforce that the Slovak initial education system was not capable to supply. Examples of skilled professionals and workers that the automotive industry is lacking include specialised mechanics, machinery operators, engineers, construction workers and repair and maintenance workers. In December 2015 there were more than 8 thousand vacant positions for operators, technicians and mechanics of machinery workers, more than 4 thousand vacant positions for qualified manual workers and craftsmen workers and more than 4 thousand vacant positions for workers in services and trade. Managerial positions in production are also in shortage, e.g. plant managers, team leaders in engineering, and technical project managers. However, indirectly related professionals are also in shortage, such as customer care specialists, supply-chain operators, etc. With limited population and only a recent history of industrialisation in lower added-value sectors, Slovakia’s scope to accommodate the large scale of the automotive industry is limited. Furthermore, the problem of low salary levels and the consequent work migration of Slovaks to Western EU countries have contributed to a shortage as well.

The Association of Automotive Industry of the Slovak Republic has been cooperating with Slovak policy makers to support the modernisation and reform of technical and vocational education. The first part of the reform that occurred in the first decade of the 2000s focused on the adoption of the concept of learning outcomes, modernisation of VET curricula and preparation of the National Register of Occupations that will prospectively relate to a National Qualifications Framework that is still under development. There is also a plan to introduce features of a dual system in Slovak VET inspired by the German model and largely in response to the needs of industry, specifically the automotive sector. [9] The conceptual preparation of the introduction of the dual system was part of the national project Development of VET that was completed at the end of 2015. A specific initiative developed and run by the Association of Automotive Industry is called “Education 4 Industry”. Within this initiative, and in close cooperation with the Central European Institute of Technology (CEITEC)[10], a wide range of specialist courses are provided to different types of learners. Under the initiative, it is possible to obtain a certified course in a selected field with no change of qualification, or engage in more complex study programmes leading to technical and vocational qualifications.

The ICT industry has seen rapid development and a significant flow of foreign investment in Slovakia in recent years. Multinational companies such as IBM, Hewlett-Packard, Siemens, Orange, Alcatel, Lenovo, Dell and T-Systems have established their service and support centres in Slovakia. Global ICT players do not build research and development centres in Slovakia (these remain in countries with more developed research in ICT) nor do they build many traditional assembly facilities for ICTs (these are still mostly located in Asia). The service and support centres in Slovakia focus mostly on providing related services in ICT business such as customer support, consultancy, programme management, etc. This also implies the types of specialists the sector seeks (and begins to experience troubles in finding them). Among specific shortage occupations are ICT consultants, ICT customer support specialists, call centre managers and specialists, logistics operators, software developers, database specialists, and ICT service managers. One of the main reasons for shortages relates to the need for introducing structural changes in the education system and curricula, so that these reflect more accurately the developments in the ICT industry, mainly by producing adequately skilled experts. Furthermore, there has been a decrease in supply: in 2012, there were more than two thousand successful applicants for the HE programmes under the title “Information and communication technology” and in 2014 it dropped to 1969. [12]

Along with the worldwide trend in technical and vocational education to attempt keeping pace with the ICT industry and incorporate its rapid developments into educational programmes and graduate skills profiles, two concrete Slovak initiatives are designed as measures to tackle the lack of ICT professionals among the available workforce. First, the IT Association of Slovakia [13] is a group of around 70 of the most important companies in the sector operating in the country. The Association produced a strategic document called “Informatisation – A Way to a Knowledge Society”. It made an appeal to the Slovak government to make structural changes in the education system and curricula, so that these reflect more accurately the developments in the ICT industry, mainly by producing adequately skilled experts such as programmers, network specialists, administrators and hardware technicians. The second initiative is cooperation between the Pan-European College [14] and Aptech Europe (a higher education institution focused on applied informatics) [15]. The cooperation has resulted in the creation of various ICT-based study programmes and other learning pathways. The resulting specialists are, for instance, database administrators, web designers, Java programmers, application developers, application testers, etc.

Slovakia has recently achieved a level of GDP per capita that is 70% to 80% of the EU average, yet Slovakia’s average salary level is below 40% of the EU average. [17] Furthermore, teaching professions constantly score among the lowest paid of occupations for which higher education is mandatory or prevalent. The economic unattractiveness of a teaching career is reported to be the main reason for the decrease in the number of young people choosing pedagogy as their career pathway, while the demand for teachers remains structurally stable. Ever increasing is the proportion of graduates from pedagogical specialisation who do not follow the profession of a teacher but rather enter public administration or different business pathways, for example in HR, finance or consulting.

The information retrieved from desk research and interviews suggests that the lack of qualified teachers is not caused structurally by a decrease in the number of applicants for pedagogical programmes in HE (that remains stable over time [18]), but in the fact that graduates from these programmes tend to choose other careers than teaching due to the reasons mentioned. However, there is no observed data for the proportion of pedagogical graduates (not) pursuing teaching careers. Neither is information currently available on specific, nationally relevant and implemented measures to mitigate the trend.

At the structural level, surplus occupations in Slovakia are evident because a relatively high proportion of the population pursue higher education programmes, especially at the bachelor level. It is reported that the general trend in the population is to pursue higher education degrees also for professions and occupations where secondary-level education or VET certificate would be sufficient or even more suitable. [19] There are four main groups of occupations identified in a 2015 report published by the Institute for Financial Policy (Ministry of Finance, Slovakia) as indicating surplus of workers. [20]

Workers with qualifications in social work [21] are found to be in surplus on the labour market, this resulting in less than 20% of social workers finding employment in their area of specialisation. Up to 45% of social workers are reported to find employment in general administrative jobs and lower clerical positions; The same trend is observed for environmental protection specialists [22] of whom more than 40% finds employment in other areas, mainly economic work in public administration; Lower-qualification level agricultural workers[23] of whom only about 33% can be absorbed by labour market demand and 4) Citizens with qualifications in humanities and social sciences. [24]

There are no systemic measures focused specifically on mitigating a surplus in a specific occupation. Among partial measures, the Ministry of Finance recommends considering regulating the annual number of graduates from surplus-related qualifications such as social work, or from qualifications with low potential for cross-sectoral mobility (medicine, pedagogy).

[2] Deriving network of doctors? Patients travel for many kilometers https://zdravie.aktuality.sk/clanok/1055/derava-siet-lekarov-pacienti-za-mnohymi-dochadzaju-aj-desiatky-kilometrov/

[3] Deriving network of doctors? Patients travel for many kilometers https://zdravie.aktuality.sk/clanok/1055/derava-siet-lekarov-pacienti-za-mnohymi-dochadzaju-aj-desiatky-kilometrov/

[4] Institute for Information and Prognosis in Education www.uips.sk/stat

[5] Association of Nurses and Patients www.asapoz.eu/clanky/zaujimavosti/lekarov-mame-nadpriemer--sestier-mame-nebezpecne-malo.html

[8] Association of Automotive Industry of the Slovak Republic https://www.zapsr.sk/?lang=sk_sk

[9] Based on information provided by a national stakeholder

[12] Institute for Information and Prognosis in Education www.uips.sk/stat

[13] IT Association of Slovakia http://itas.sk/

[18] Institute for Information and Prognosis in Education www.uips.sk/stat