Too many young people in Malta, around 20%, leave the education and training system with low-level qualifications compared to the EU average of 12%. Malta is one of several countries including Spain, Portugal and Romania that may not reach the EU benchmark of reducing early school leaving to below 10% by 2020.

These trends matter. Almost all new jobs created in Malta over the next decade are forecast to require high- or medium-level qualifications. Between now and 2025, most job opportunities, around 26%, will be for professional occupations in science, engineering healthcare, business and teaching, followed by 20% for service and sales workers.

‘Apprenticeships provide employment opportunities for young people,’ he says. ‘In Malta in 2012, of those who did not continue studying after completing their apprenticeship, 92% were in employment. Apprenticeships also have a very small dropout rate and can reduce early school leaving. Current apprenticeship reforms in Malta may link education and work more closely and so help young people, raise qualifications levels and contribute to keeping employment in Malta high.’ 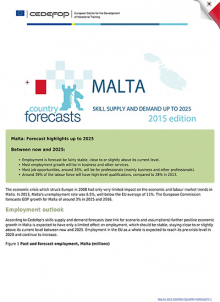