Can a bit of a skill gap be a good thing?

A lot of people ask me what have we learned from Cedefop’s 2014 European skills and jobs survey (ESJS). Carrying out the ESJS survey was a sizeable feat. To put it in some perspective, the survey kept us busy over the course of four years; it relied on the significant inputs of a group of 12 experts from various universities and international organisations (OECD, Eurofound); more than 20 skills-related surveys from across the globe were consulted in preparation for the final questionnaire; three pilot and cognitive survey rounds were carried out ahead of the main fieldwork; the survey was translated into 35 different languages; and, after numerous meetings, email exchanges and sleepless nights…a total of 48,676 adult employees from the 28 EU Member States were eventually surveyed.

So what have been the main lessons that one can draw from this new and rich source of data on skills and jobs in European labour markets? In this and a series of forthcoming blogs, I will reflect on some of the key lessons from the ESJS.

Lesson 1: skill mismatch - it is all Greek to me!

A lot has been said and written about skill mismatch in recent years. It is now widely accepted by many, from the highest ranks of power to most company owners, both large or small, to the young graduate seeking urgently for a good job, that skill mismatch is a significant problem. But calling something with the same name does not necessarily imply that we are speaking the same language. Cedefop’s research over the years has highlighted the subtleties and intricacies of the many different types and forms of skill mismatch that affect our economies. Whereas policymakers and employers generally focus on the ‘shortages’ and ‘gaps’ of skill that arise when unemployed or young graduates are insufficiently equipped for modern workplaces, adult workers are often faced with a different challenge. For most of them, the real issue is to keep them learning, engaged and motivated in their work, so as to avoid that their skills are ineffectively utilised or insufficiently recognised.

All of this implies that to address the various facets of skill mismatch, different types of policies will have to be designed – a one-size-fits-all policy will prove to be a straightjacket.

Lesson 2: being ‘unskilled’ is not the same as ‘underskilled’

Setting the definitional riddle aside, one of the most striking findings in our ESJS data is the fact that it highlighted a gross misinterpretation between the intention of policymakers and the language of research.

Policymakers are rightly concerned about the skill gaps or skill shortages of the workforce – the focus is on whether young and adult workers have an adequate level or mix of skills relative to those needed by their jobs, in what are widely recognised as dynamic, knowledge-based, global economies. But an ‘underskilled’ employee, namely one who has a lower absolute level of skills in relation to what is needed to carry out his job duties, is not necessarily a person with a low skill level. A person may be underskilled even if he has a high qualification, or significant experience accumulated during his job tenure. Indeed, if s/he is employed in a technologically intensive job that is evolving at a fast pace, s/he may be underskilled and s/he will have to find ways to continuously upskill. 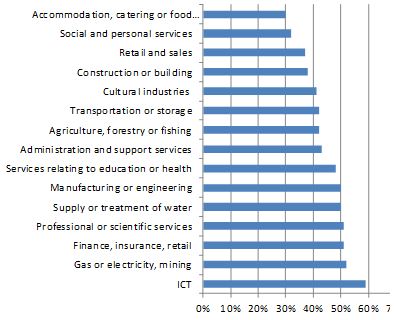 (b) Share of adult employees underskilled at start of their job and share with low qualifications, by sector, 2014, EU28 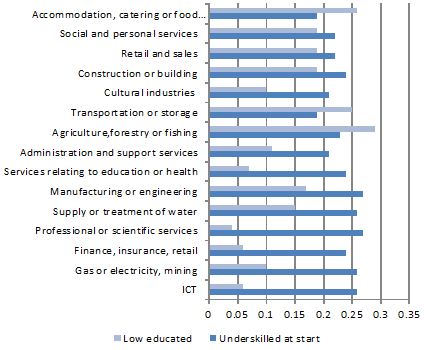 In a similar logic, a low educated/skilled person may not be ‘skill mismatched’, simply because s/he is more likely to be employed in an inherently low-skilled job. Not surprisingly, the highest levels of technical change and levels of underskilling among employees are most apparent in the ICT sector (see Fig 1), even though there is a very small share of people with low qualifications in that sector. Whereas employees in the accommodation and catering sector, which has a low share of employees affected by changing technologies in recent years, are the least likely to be underskilled. This is despite the fact that the sector employs the highest share of low educated individuals in the data.

What the above makes clear is that it is important never to forget that ‘skill mismatch’ is a balancing act between two elements (1) the skills of the person and (2) the skills required by the person’s job. Only if (1) is below (2) is the need for continuing learning pronounced, for the sake of keeping up with the changing skill needs of the job (of course, there are plenty other reasons, social or personal, for which an individual may decide to engage in adult learning!). By contrast, when (1) and (2) balance, there will be limited skill mismatch - this is exactly why most adult education surveys tend to reveal that the most important reason for not engaging in further training is because both individuals and employers do not ‘see a need for it’.

Lesson 3: a ‘little bit’ of a skill gap can be a good thing

Related to the above, the ESJS survey has clearly shown that most adult workers in the EU feel that their skills are underutilised or unrecognised in their jobs – about 4 in 10 employees responded that they have higher skills than needed to do their work (overskilled), as opposed to less than 1 in 10 who ‘admitted’ to being underskilled. Human beings have a natural tendency to feel that their skills are not fully exploited by their employer, yet the survey clearly demonstrates that something else is also at play.

In particular, the overskilled and underskilled are in jobs of different skill intensity – that is, their jobs offer significantly different opportunities to utilise and further develop their skills.

The overskilled tend to be employed in the accommodation and catering, retail or transport and storage sectors. They are less likely to receive formal or informal training in their jobs while their daily tasks involve much less learning relative to those with matched skills or the underskilled (see Fig 2). By contrast, workers are more likely to feel that they need to develop their skills further if employed in relatively dynamic sectors, such as ICT and Professional and scientific services, while the jobs of 6 in 10 such workers entail a continuous need to learn new things. Due to the dynamic nature of their jobs, the underskilled are most likely to say that their skills will become outdated in the next 5 years. 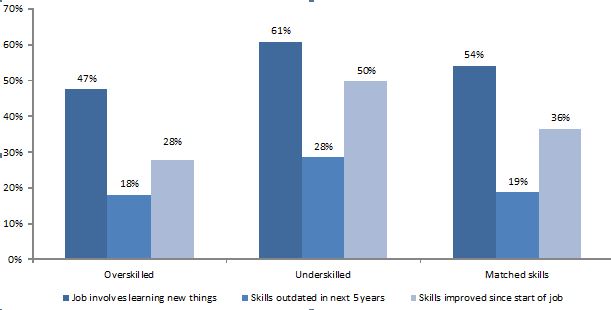 Ultimately, it is the underskilled who have developed their skills more since the time they started their current job. So next time you find yourself claiming that ‘a lot of workers in Europe are underskilled for their jobs’, make sure that you first ask yourself: ‘is this really such a bad thing?’

Cedefop, (2015), Skill shortages and skill gaps in European enterprises: Striking  a balance between VET and the labour market, Cedefop reference series No. 102.

Cedefop, (2015) Skills, Qualifications and Jobs in the EU: the making of the perfect match.  Luxembourg: Publications of the European Union, Cedefop reference series No. 103.