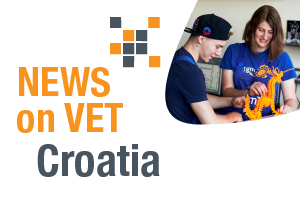 The Zagreb and Petrinja earthquakes that occurred in the spring and winter of 2020 respectively, caused major disruption in the education process at all levels, including VET.

On 29 December 2020, a destructive earthquake (6.2 ML) hit central Croatia, with an epicentre close to the town of Petrinja in Sisak-Moslavina County. Several foreshocks and numerous strong aftershocks destroyed many houses and caused heavy damage to public infrastructure, including the premises of education providers:

The Government declared a natural disaster in the Sisak-Moslavina and two neighbouring counties. Earlier that year, on 22 March 2020, a destructive earthquake had also hit Zagreb (5.5 ML) causing serious damage to the capital and VET provider premises. Consequently, learners of the affected providers were relocated to other premises, as schools remain damaged or under construction to date.

Policy responses to ensure continuity of teaching and learning

In the aftermath of the earthquake, the beginning of the second term of the school year was delayed for a small number of providers, while most learners followed distance education. To facilitate online learning in the most affected region of the Sisak-Moslavina County, the education ministry secured in January 2021 around EUR 130 000 for textbooks for teachers and learners and for digital equipment, such as laptops, computers, tablets. Further, in January and February, several online workshops on psychosocial support for handling crises were held for teachers and professional staff from counties hit by the latest destructive earthquake, as well as the Zagreb earthquake earlier that year. The ministry also waived housing fees in dormitories for learners from the areas hit by the December earthquake.

By March 2021, most providers who had experienced minor damage, had completely restored their facilities, while reconstruction of the heavily damaged premises was still underway or in the process of procurement of construction works. The ministry also announced future support for the reconstruction procedure through the EU Solidarity Fund.

Education providers across Croatia were advised to take measures to prepare for possible future earthquakes by strengthening their security measures, training teachers and learners in emergency evacuation procedures, conducting evacuation drills and revising their evacuation and rescue plans accordingly.