Job opportunities include new jobs and vacancies to replace people going to other jobs or leaving the labour market. In Ireland, most job opportunities, around 19%, are forecast to be for high-level professional occupations in science, engineering, healthcare, business and teaching, followed by around 15% for both service and sales workers and elementary occupations. Reflecting growth in construction, the share of job opportunities for craft and related workers in Ireland, around 12%, is well above the EU average of 5% for these types of workers (Figure 2).

Less encouraging is that labour market participation - the proportion of people of working age either working or looking for work - is forecast to fall from 60% in 2013 to around 55% in 2025, close to the EU forecast average of 55.5%.

Labour market participation can fall for several reasons. More young people staying in education and training longer before looking for their first job reduces participation. However, in the longer term this can be positive as it leads to a more highly qualified labour force. According to Cedefop, by 2020, around 63% of 30 to 34 year olds in Ireland will have high level qualifications, well above the EU’s target of 40%.

An ageing population can also reduce labour market participation as more people retire. Ireland’s labour force is getting older. Population growth is projected to be mainly in the age groups over 45 years (Figure 2). But participation also falls because people of working age leave the labour market for other reasons, such as family responsibilities, illness or disability, while some just give up hope of finding a job. Such people, should they wish to return to the labour market need to have opportunities, including training to help them find a new job.

As well as welcome news about jobs overall, the forecasts show that demography and not just economics are influencing employment. To achieve high levels of employment, economic growth is not enough. People need to be encouraged to stay in or return to the labour market. 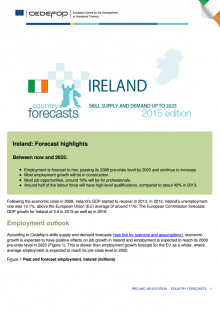