Digital plus: In the digital age, digital skills are not enough

Excitement at the prospects of the new digital era is tempered by worries that people will lose their jobs to robots and machines. But before reaching conclusions about the future, it is important to understand the different ways technology is changing the world of work; namely job substitution, job creation and job transformation, as Cedefop’s latest briefing note explains.

Job substitution is the real concern. According to Cedefop, 43% of adult employees in the EU have seen the technologies they use change in the past five years. As well as routine, low-skilled work, technology can now perform complex tasks, such as legal searches and some surgery. Drivers were once thought safe as driving is unpredictable, but self-driving cars are a reality.

However, technology has also created jobs, which a few years ago did not exist, such as web analysts and applications developers. Cedefop forecasts another half a million new jobs in ICT occupations in the EU by 2025. History also shows technology has unlikely job benefits; who knew what the first flying machines would do for tourism?

Technology destroys some jobs and creates others, but its greatest effect is to transform job content. A 2016 study of several OECD countries, calculated that on average just 9% of jobs were at high risk of automation, but at least 70% of tasks could be automated.

The way technology transforms jobs shows that to keep up with changes, simply improving digital literacy is not enough. People in jobs requiring moderate level ICT skills also need strong complementary skills. Along with literacy and numeracy they also need to be able to plan, organise, communicate and work in a team. To work in ICT you will probably need a foreign language, often English.

Not every lorry driver will become a computer programmer, or needs to; future drivers may use technology to guide several self-driving vehicles or drones to deliver goods rather than sit behind a wheel. But moving from driving to logistics is a step up and places considerable emphasis on education and training systems to provide new combinations of skills throughout working life.

Earlier industrial revolutions developed education and training systems that provided young people with social and technical skills for life. Now, technological change is accelerating skill obsolescence, meaning that most future skills will be acquired in the workplace during adult life. Consequently, systems need to be more flexible. Digital skills are amongst those most likely to be developed through practice at work and gaming during personal time. Easier validation of digital skills acquired outside the formal education and training system would make them more visible and improve job prospects.

Combining digital with other technical and behavioural skills will ensure that people and technology remain complementary. Technology can perform tasks and collect data, but people must decide what the tasks should be and what the data mean. As Picasso said, ‘computers are stupid, they only know answers’.

Read more about Cedefop’s work in the field of skills mismatch: 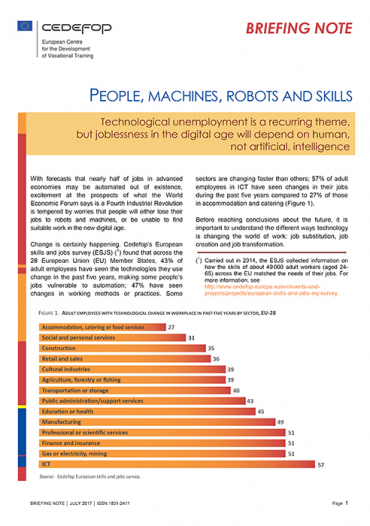