Looking at past, current and future trends (3-4 years), a number of occupations have been identified as mismatch priority occupations for Malta, i.e. they are either in shortage of surplus.

The list below is based on an assessment of the labour market of Malta. The occupations presented are not given any rank. All of them present high mismatch. 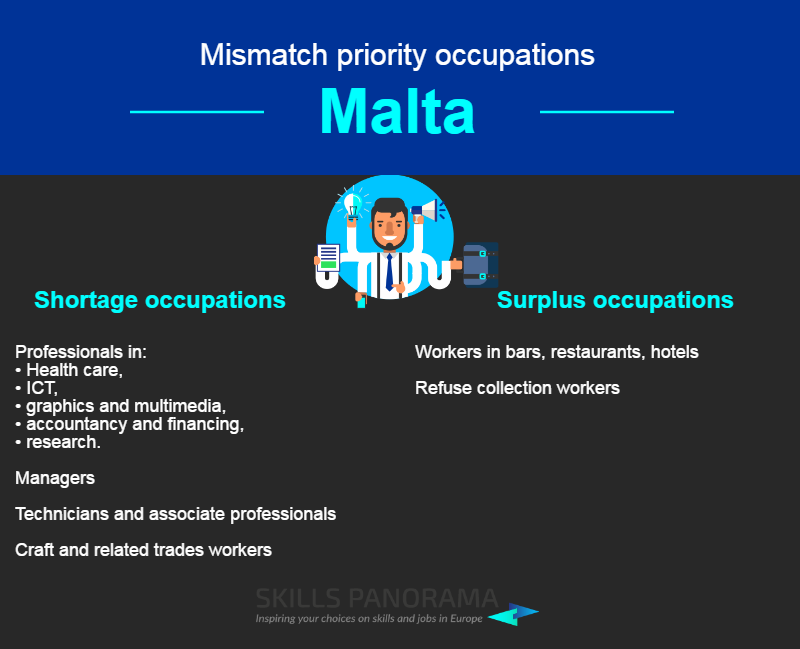 This category encompasses a wide range of professions. While in some sectors (e.g. law, education) there are essentially no shortages, in other sectors shortages have been identified. For example:

A general reason for shortages of professionals relates to the fact that the number of tertiary level graduates in Malta remains low (third lowest in the EU) compared to other EU member states: approx. 28% compared to the EU28 average of approx. 39% for the 30-34 age group having completed ISCED level 5 to 86. Furthermore, 14% of the 20-34 age group with tertiary education are in a job which does not require their level of education.13

The National Commission for Further and Higher Education is currently collecting data for a graduate tracer study and the findings will be published during the first half of 201614. This will provide information to explain the under-qualification of professionals in the market. It would also complement the Employability Index published in 2015 by the Employment and Training Corporation.15 The Employability Index and the graduate tracer study provide good evidence to show how the labour market is affecting different graduates. There is a need for better career guidance as this is not compulsory and the information provided is not always relevant and significant. The government of Malta has tried to encourage more students into shortages areas by offering higher stipends for certain courses, especially those related to science and ICT, and also by creating a more interactive way of presenting scientific topics during compulsory education years, such as “Science weeks”.

In Malta, 54% of managers are underqualified17. Many with the title of manager have education at secondary level. This provides the employer with a person who is willing to work for less money than a tertiary graduate would. This practice is not only present in the private sector but also in some government entities..  Although a shortage should lead to a higher income, the under-qualification of managers may explain the decrease in average income observed between 2011 and 201319.  Furthermore, managers are not recruited solely from the business faculty but also from faculties that are not directly related (e.g. psychology). The main implication here is that the professional status which should be attached to the title ‘manager’ is no longer evident since this is not always linked to tertiary education level or to business or management graduates. This creates a credibility issue in the labour market.

It is recommended that the title of manager be reserved for those who have the corresponding level of education. Although there were suggestions of official recognition of this status, in the form of a warrant, this has never been implemented. It is perhaps time to take the issue up again. Furthermore, there may be a need to distinguish between different types of managers, since the title tends to encompass a wide spectrum of managerial duties and responsibilities.

The demand for technicians and associate professionals in support services has been significant in Malta. This category employs the third-largest number of people, where 26% are under-qualified21. This explains why the level of training is above average22. Also, salaries decreased during 2011-201323. Particular professions continue to experience shortages such as: health associate professionals; ICT technicians; electrical and mechanical technicians. Shortages may be related to the fact that vocational enrolment at the upper secondary education level remains the lowest in the EU at 14.5% compared to the EU28 average of approx. 56%24. Even the creation of the Malta College for Arts, Science and Technology in 2001, which brought together all trade and vocational schools and over the past fifteen years has expanded the number of courses offered, seems to have failed to attract more students.  A survey conducted by the Malta Union of Teachers found that 88% of respondents favoured the introduction of VET subjects in general secondary education since this would encourage those students who prefer a more hands-on learning experience25.  Moreover, there are conflicts between the world of education and the world of work in Malta, particularly since a skills audit system is not in place26.

ESF programmes during 2007-2013 tried to create occupational standards in several sectors. Examples include ESF1.29 Skills Plus, in 9 key sectoral areas: art and design; community services; agribusiness; building and construction engineering; business and commerce; electrical and electronic engineering; mechanical engineering; tourism studies; and heritage studies.27 A more specific project was ESF1.34, Addressing Skills Mismatches in the Aviation Maintenance Industry. All these projects aimed to create standards in various occupations, which were targeted to create a more visible and professional vocational standing for these skills, particularly in areas where academic qualifications may not always be possible for the practitioners who attended the courses organised.

Investing in Skills is an EU funded Scheme to be launched later in 2016. It will offer training with preferential rates for the maritime, ICT and aviation sectors. Much attention has been given to vocational training after compulsory education. However, it is recommended that attention should be given to apprenticeship schemes and vocational education at higher secondary level to encourage (at a younger age) especially those students who find academic programmes challenging or too demanding.

This category requires very specific skills requirements and includes various diverse sectors: construction; metal and machinery related jobs; handicraft and printing; electrical and electronic trades; food processing; woodworking; and garment and craft workers. Shortages can be explained by insufficient supply. Prior to 2001 there were several trade schools which catered for persons (particularly boys) who did not enjoy the academic aspect of education. They left school with skills that the labour market needed at the lower end, such as electricians, plumbers, plasterers, stonemasons etc. For females, the skills normally leaned towards, catering, sewing, or hairdressing. Students made such choices at the age of 14. Now students can choose one vocational subject, but compulsory education (which ends at 16 years) remains highly academic, which may not be attractive to all students. One persistent problem is that Malta has a high proportion of early school leavers (over 20%, second in the EU), although there was a 4 percentage points decrease between 2011 and 201434. There are also sector-specific reasons for shortages. For example, there is an increasing demand for local handicrafts in the tourism industry. However, the unfavourable working conditions (extended working hours) and the perception of these occupations as less attractive, lead to insufficient labour supply.

From September 2014, the National Apprenticeship Scheme was taken over by the main VET institution in Malta (MCAST). The main rationale was to entrust the apprenticeship scheme to MCAST to better link with its training programmes - given that MCAST works in collaboration with the private sector. MCAST also organises a national conference to discuss skills gaps in the Maltese labour market. VET needs to be introduced at a lower level of the educational system to cater for those who prefer learning by doing (rather than learning from books). It is recommended that more trade and vocational courses are re-introduced at the secondary level, which would encourage more students to remain in school and learn a useful trade.

The surplus occupations are at the lower skills level of the labour market40, and particularly in elementary positions41 e.g. work in bars, restaurants, hotels, construction, refuse collection, and other manual work. It should be noted that local people would prefer to register as unemployed, rather than take up lower-level jobs. These jobs are usually filled by foreigners and migrants. Graduates tend to find jobs in the labour market, though not necessarily in the areas of their qualification, and whilst there may be a job for all graduates, there are certainly surpluses in some areas, such as teaching.

For the first time, an Employability Index was published in 2015 44 – this is a tool to inform students about opportunities in the job market before they engage in a course. The Employment index is expected to be published at regular intervals in order to provide timely information about an evolving labour market, which is small enough to be effectively flexible. However, there is also a need to ensure that career guidance is effective and in accordance with current labour market needs.

1. ISCO 2 (due to data limitations, the ISCO classification covers the whole subcategory, in this case Professionals, including the science, health, teaching, business, administrative, ICT, legal, social and cultural sectors)

2. Discussion with stakeholders in the labour market

3. Discussion with Head of Accountancy, Faculty of Economics, Accountancy and Management, University of Malta.

14. National Commission for Further and Higher Education (2016b) Graduate Tracer Study as part of an Erasmus+project ‘Supporting the Bologna Process in Malta 2014-2016’.  (Project findings to be published by mid 2016) Read more: www.ncfhe.org.mt

16. ISCO 1 (includes all types and levels of managers)

20. ISCO 3 (associate professionals as in the sector in endnote 1)