Slovakia: integrating Ukrainian refugees in VET and the labour market 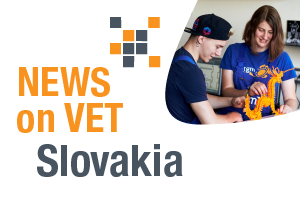 According to the monthly data collected via the regular education monitoring system, there were 9 732 learners from Ukraine enrolled in the Slovak education system, of which 1 581 in kindergartens, 7 287 in basic schools (ISCED 1+2) and 864 in secondary schools (including VET), as of 6 May 2022.

Integration of refugees in education

Statistical data, interviews with national authorities, and VET school representatives confirm that no urgent measures are needed in VET for admission of refugees. Emergency enrolment of children, pupils and students has already been allowed by law, and can be handled autonomously by school directors.

Only about one fifth of refugees arriving daily are temporary shelter seekers. Although it is not possible to estimate the number of refugees willing to stay in Slovakia as future permanent residents or citizens, the number of refugees willing to return to Ukraine after the war or move to other countries is significantly higher than the number of those willing to start learning and working in Slovakia. Many schools reported that, after a short period of enrolment in schools in Slovakia, families with children moved to other countries due to higher-paid job offers. This leads to a relatively low level of interest in starting VET compared to grammar schools. Similarly, higher enrolment is observed in kindergartens and basic schools compared to upper secondary schools, including VET schools. Involvement of younger children in education is crucial in order to promote employment of their parents.

There is a Ukrainian minority living in Slovakia, and there is some stream of provision of education in Ukrainian as a language of instruction. In contrast to general education serving Ukrainian-speaking learners (curricula, textbooks), there is no similar provision for VET schools. This might contribute to the comparably lower interest in enrolment into VET. The experience with a Ukrainian-speaking subsystem might facilitate adjusting the VET system to the refugees’ needs, if necessary.

In support of the integration of refugee learners, the education ministry created a bilingual dedicated website (in Slovak and Ukrainian), adjusted to information seekers’ needs. General information in Slovak is structured into the following topics: regional schooling including VET, higher education, sports, financing, information for parents, supporting documents, FAQs, and contacts. A section focused on Ukrainians contains an interactive map of Slovakia offered in both languages, indicating schools’ capacity (including VET) of accepting Ukrainian learners, and their contact information. There is also a Ukrainian-language questionnaire, which allows refugee teachers to apply for jobs in the education sector to support Ukrainian learners.

The Employer Council for VET developed a manual to assist the smooth inclusion of Ukrainian refugees into secondary VET schools and dual VET. To support the entry of Ukrainians in VET, the Council – in cooperation with regional centres affiliated to the State Institute of Vocational Education – produced a list of companies and cooperating VET schools with numbers of learning places available in respective fields of study (occupations). Learners not willing to enter the Slovak education system are offered online distance learning by the International Ukrainian School, based on an agreement between the Slovak and Ukrainian education ministries.

Integration of refugees in the labour market

Continuing VET, skills identification and the recognition of previous learning experiences are more relevant in the case of persons clearly indicating a wish to stay in the country for a long time. However, in order to secure an income, many Ukrainians are currently looking for easily accessible jobs which do not necessarily match their qualifications, postponing therefore their final decision on appropriate qualification-matching jobs until later, and not necessarily in Slovakia. They fill many job vacancies for which the Slovak language is not essential, and which offer a comparably low salary sufficient to cover their current living costs – a solution often preferred over the support offered to refugees by the State.

The Ukrainian minority and people who left Ukraine before the war are very supportive of refugees in their communication with national authorities. The most important role is that of Ukrainian-speaking specialists (psychologists, animators and childcare specialists) during the first-contact period.

As of 6 May, 230 Ukrainian refugees were employed in schools, 117 of which started working immediately after the outbreak of the military conflict. Most of them (57) found work in the Bratislava region, which is the most attractive one for refugees, with 1 846 learners enrolled in total. All school employees are required by law to have a certificate of moral integrity. In addition to that, Ukrainians must undergo psychological testing (including a written assessment) by a clinical psychologist. To minimise the administrative burden, a pragmatic solution has been found for the first requirement, such as accepting a personal declaration or a confirmation obtained from the Ukrainian authorities via online application. For the second requirement, the legislation created a serious obstacle to the employment of Ukrainians in schools. The availability of clinical psychologists and a lack of appropriate procedures for testing Ukrainian speakers were underestimated. An amendment to Lex Ukraine adopted by the Parliament to support the smooth integration of refugees is therefore currently under discussion.