Poland: Economic growth is not enough to increase employment

There will be job opportunities due to newly created jobs or vacancies to replace people going to other jobs or leaving the labour market. In Poland, between now and 2025, job growth is forecast for the distribution and transport sector and in business and other services. Construction is also expected to see a small increase in jobs. Demand is expected to be high for high-level professional occupations in science, engineering healthcare, business and teaching, but also for service and sales workers.

To meet demand Poland will have a more highly-qualified workforce. By 2020, around 67% of 30 to 34 year olds in Poland should have high-level qualifications, well above the EU’s target of 40%. The problem is that labour market participation - the proportion of people of working age either working or looking for work - in Poland is forecast to remain between 53% and 52% over the next decade, compared to 55.5% for the EU.

One reason is that Poland’s population is getting older (Figure 2). As the labour force ages, more people leave it to retire. Between now and 2025, there will be a significant fall in numbers of people aged between 15 and 39 participating in the labour market. But it also implies that significant numbers of people of working age are outside the labour market for reasons, such as family responsibilities, illness or disability, or because they have given up hope of finding a job. To increase employment levels, as well as economic growth, Poland needs to find ways, including training, to bring these people, many of them well-qualified, into its labour force. 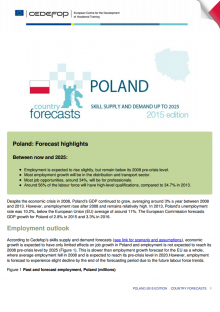