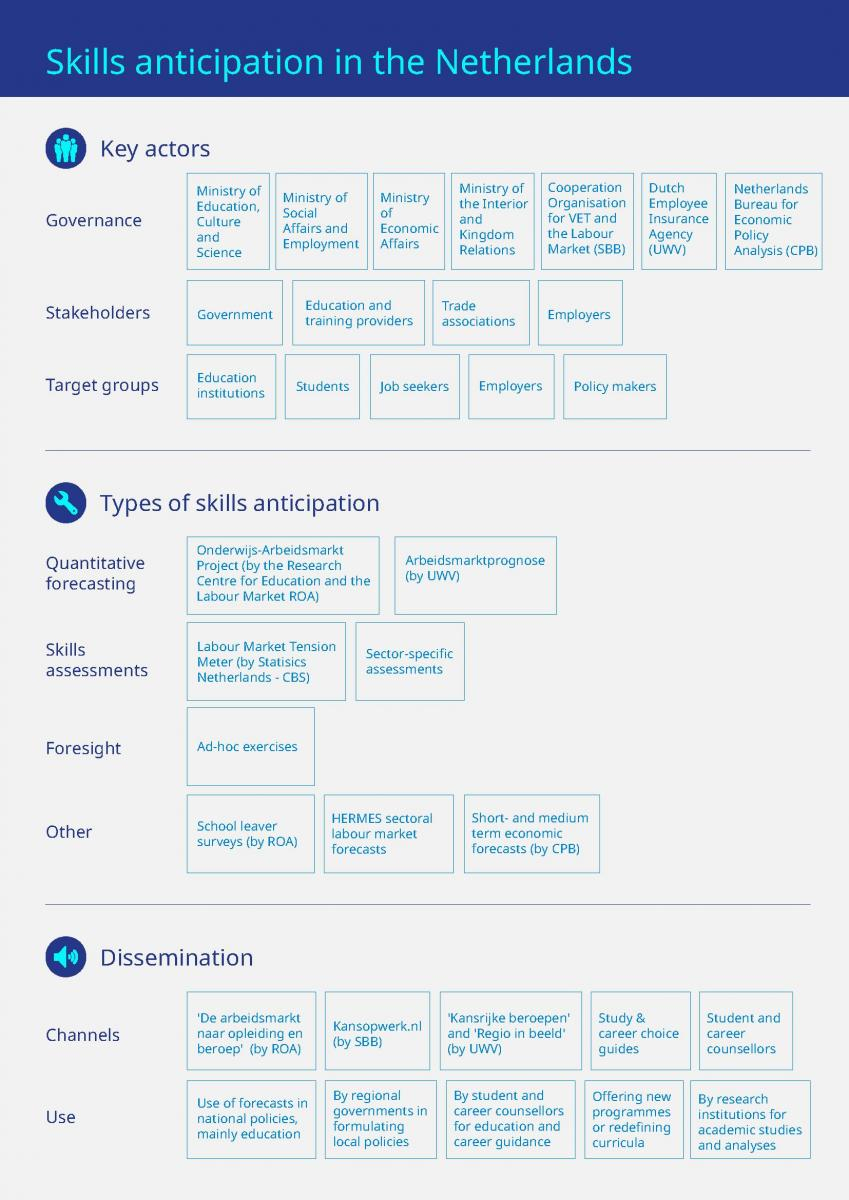 A collection of 28 new analytical highlights focusing on skills anticipation in all EU-28 Member States, is now available on the Skills Panorama. The overviews mainly regard the existence of skills anticipation methods; the governance structure (which authority/ies are responsible); the level of stakeholders’ involvement; the dissemination of labour market intelligence and the level of the use of this intelligence in policy making and in decision making by target groups (see Figure for the example of the Dutch approach).

These overviews of skills anticipation in EU countries also confirm that the way that the distinctive elements of a ‘system’ are being developed as well as the planned initiatives and improvements are almost solely dependent and affected by each country’s specificities. Yet these overviews can offer useful policy lessons. Similarities in policy challenges (e.g. high unemployment, multiple stakeholders involved) among seemingly different governance systems and economies in the EU make cross-pollination between countries not only possible, but valuable too. For example, the Irish approach to stakeholders’ involvement; the coordination of several activities in the Netherlands; the use of skills anticipation information in VET policies in Austria; are only some examples that can offer ‘take-away lessons’ to inspire other EU countries.

However, due to the complexity of skills anticipation and its governance, one needs to delve into specific country examples to identify answers and suggest meaningful, actionable and implementable steps. Cedefop has significant expertise in this area and is currently undertaking a new project on “Governance of skills anticipation and matching systems: Country reviews”. The reviews use a wide range of relevant Cedefop databases and instruments, such as the first compendium of guides on skills anticipation methods, the European skills and jobs survey, the Making Skills Work index, Cedefop’s skills forecasts and the country reports monitoring the progress of VET policies and systems in EU countries.

Learn more about skills anticipation and how it is governed in each EU Member State in the collection of analytical highlights.