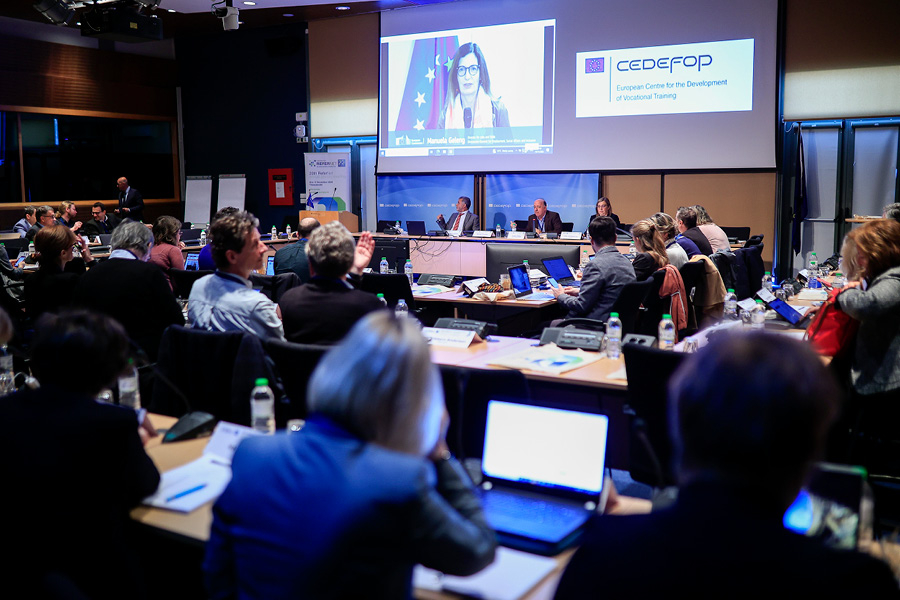 ReferNet, Cedefop's network of institutions which provide information on national vocational education and training (VET) systems and policies around Europe, celebrated 20 years of successful cooperation with a dedicated event in Thessaloniki on 9 November, followed by its annual plenary meeting (10 and 11 November).

During a memorable evening at the Thessaloniki Concert Hall, participants watched a message from European Commission Vice-President Margaritis Schinas and listened to an inspiring presentation by futurist Fabienne Goux-Baudiment, offering an insightful look into the future of education and society as a whole.

Mr Siebel opened the event with a look back at the network’s rich 20-year history. ‘What a great and purposeful 20 years this has been,’ he exclaimed, adding that ‘booming interest in exchanging knowledge and views on VET and skills helped shape the network.’ He also noted that ReferNet and the Copenhagen process, aiming to establish common European objectives and reform national VET systems, were born in the same year – 2002.

According to the Cedefop Executive Director, ‘From the experience of the first 20 years it is clear that we are dealing with a cooperation based on mutual benefit – a win-win situation. ReferNet’s tremendously successful contribution so far makes the network one of Cedefop’s most cherished enterprises as we face and plan for the years ahead.’

Addressing the ReferNet partners, Cedefop Head of Department for VET and Qualifications Loukas Zahilas highlighted that ‘we are a group of people, a group of Europeans, representing all EU Member States, Iceland and Norway, sharing the same vision of working for a better VET.’

In his video message, Mr Schinas congratulated ReferNet on its anniversary and talked about the upcoming European Year of Skills 2023.

‘Skills are what allow people to excel and businesses to grow. They enable us to navigate a crisis, adjust to change and recover. They are key to our competitiveness but also to the cohesion of our societies,’ he said, adding that ‘our ultimate objective is to empower people and allow them to be better equipped to manage their lives.’

The Commission Vice-President stated that 2023 will be ‘a year of growth and collaboration, of synergies between our regions, business communities, SMEs and academia. Fundamentally, it will be a year of awakening vocations and training.’

Concluding, he argued that ‘in Europe we need a skills revolution and we need it now, but one that at the same time leaves nobody behind.’

Education in a ‘liquid world’

Ms Goux-Baudiment presented the notion of a ‘liquid world’. She talked about the great historical transitions of human societies, looking into the current trends and what can be a bright future, with education playing a vital part.

Regarding the challenges to education in a disruptive socioeconomic environment, she maintained that the great transformation leading to development model X.0, which is characterised by liquidity, calls for new tools and solutions. Education will prepare free individuals, ‘liquid’ people claiming a new freedom. The goal is to bring freedom while keeping social cohesion to enable the great transformation.

The ReferNet partners gathered again the following day at the Cedefop premises for their two-day annual plenary meeting. They all expressed their delight that they were able to meet again in person following the coronavirus pandemic.

European Commission’s Manuela Geleng outlined the latest VET policy developments. She reiterated that the Commission relies on the expertise of Cedefop, its sister EU agency, the European Training Foundation, and ReferNet in monitoring the progress of the national implementation plans (NIPs) on VET.

George Kostakis, Cedefop coordinator of the VET policies and systems team, presented the soon-to-be-released ‘Timeline of VET policies in Europe’.

Cedefop experts also presented adjusting policy reporting to the countries’ NIPs, inspiring national news on VET for European policy-makers and practitioners, an introduction to the ad hoc activity on improving understanding of qualifications in online job advertisements, and a comparative analysis of ReferNet reports on teachers and trainers in a changing world.

In open space sessions, on both days, participants discussed how they would like ReferNet to develop in the next 10 years.

Wrapping up proceedings, Cedefop Director Jürgen Siebel paid tribute to Sylvie Bousquet who has been ReferNet coordinator throughout its 20-year history.

Check out the anniversary photos here. 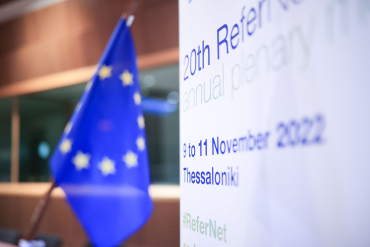