Hungary: measures taken in favour of the integration of Ukraine refugees in VET and the labour market 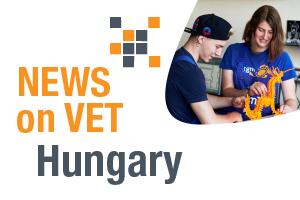 The Hungarian Government has introduced various measures to help Ukrainian refugees who apply for work, and to support the participation of their children in public general education (pre-school and school) as well as in vocational education and training (VET).

Since the beginning of the armed conflict in Ukraine, over 1 million Ukrainian refugees – mostly women and children – have arrived in Hungary. The need for their systematic support at all levels and their integration has been a priority for the Hungarian Government.

Financial support to facilitate access to employment for refugees

This non-reimbursable financial support is granted to employers so they can provide for the travel and housing expenses of their Ukrainian employees. It may be granted for the duration of an employee's contract, but for a maximum of 12 months. Companies and certain State budgetary institutions can apply for the support.

Ukrainian citizens who request temporary protection, do not have any income, and are registered as a potential employee, are entitled to regular subsistence allowance.

According to the data on claims submitted before 22 June 2022, a significant number of Ukrainian citizens got an opportunity to be employed in Hungary.

Financial support provided to facilitate access to VET for refugees

The Hungarian Government has enabled the use of additional budgetary sources for schools on a regular basis. In this way, it supports the individual development of pupils under temporary protection by offering them five extra lessons per week.

However, language barriers appear to be a more significant challenge in VET than for instance in pre-school education, where the care of Ukrainian children can be provided without major communication problems. Due to these reasons and because of the differences in the VET systems of the two countries, the number of pupils with Ukrainian citizenship enrolled in Hungarian VET schools is negligible.

The international cooperation in VET within the Carpathian Basin has been a priority for Hungary for many years. Ferenc Rakoczi II Transcarpathian Hungarian College of Higher Education and the VET Centre of Mátészalka started a common VET programme in 2019 with the objective of involving pupils from Transcarpathia in the innovations of the Hungarian VET system, thereby increasing the competitiveness of Hungarian VET provided across the border.

In October 2021, 308 pupils were enrolled in this programme. Due to the armed conflict in Ukraine, the number of the participants decreased by approximately 20%. The VET Centre of Mátészalka is attempting to help the approximately 240 pupils who still attend the courses and some 30 teachers and their family members by providing them, among others, with free accommodation.