Automation of work and skills

Rapid digitalisation and the spread of new technologies, such as advanced robotics and artificial Intelligence (AI), are creating widespread disruption in EU labour markets, including a risk of job loss and displacement for some occupations due to automation.

Cedefop’s Digitalisation, AI and future of work project investigates the risk of automation across EU economies, sectors and occupations to understand who is more likely to be affected by job polarisation and substitution by machines, robots and algorithms and what new skill needs may be required by new jobs and work environments.

Cedefops’ analysis on automation of work aims to be a key input to the effective design of adult learning and upskilling/reskilling policies in the EU.

A first analysis on Automation risk in the EU labour market, which uses data on skill needs and tasks of jobs from Cedefop’s 1st European skills and jobs survey, shows that about 14% of EU jobs face a risk of displacement by computer algorithms. Jobs most likely to be affected include those with higher reliance on routine tasks and low demand for transversal and interpersonal skills. Low-educated workers and employees in jobs receiving less vocational training face a higher automation risk.

Building on key lessons on ‘robots and the future of work', Cedefop’s note ‘People, machines, robots and skills' presents evidence that digitalisation is associated with higher future skill needs and that individuals’ adaptability to digital change does not only depend on acquisition of more digital skills, but on complementarity of their key competences.

Cedefop also analyses how incentives and human resource practices in organisations and businesses can spur or stem work automation. The Cedefop report ‘Assessing the employment impact of technological change and automation: the role of employers’ practices’ assesses the extent to which occupations at high risk of automation have experienced employment loses in recent years and examines the link between occupational decline and organisational practices. 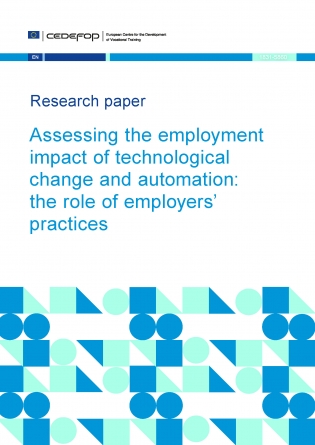