Looking at past, current and future trends (3-4 years), a number of occupations have been identified as mismatch priority occupations for Luxembourg, i.e. they are either in shortage of surplus. Shortage occupation: an occupation that is in short supply of workers, and for which the employers typically face difficulties finding a suitable candidate. Surplus occupation: an occupation for which there are plenty of suitable workers available but low demand. The employers have no problems filling such posts.

The list below is based on an assessment of the labour market of Luxembourg. The occupations presented are not given any rank. All of them present high mismatch. 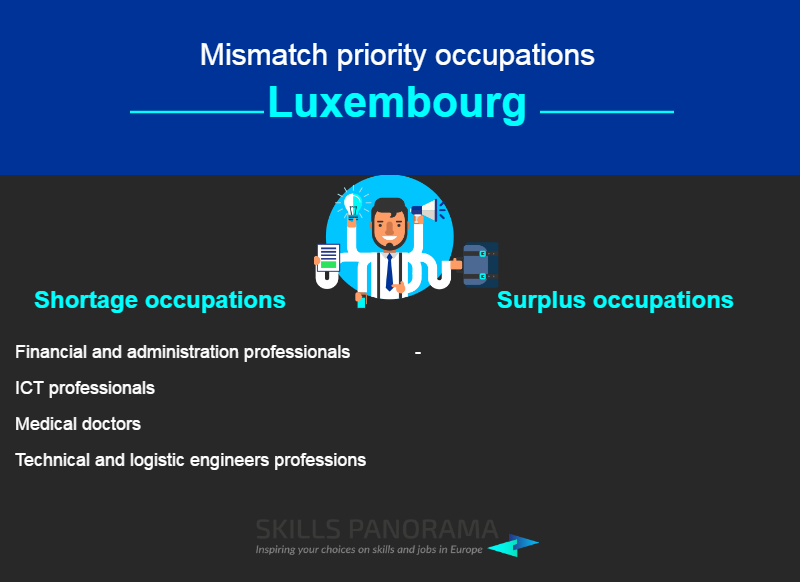 Occupations in the financial sector, administration, sales and marketing are in high demand. In total, employment in these professions accounts for a large proportion of jobs in Luxembourg. The large size of the financial sector reflects that the country is a major financial centre and skills shortages exist because of growing demand. [2] Despite the economic crisis, the financial sector continued to create jobs. While banking employment has fallen since 2008 (90 people per year) the number of “soparfis” - firms investing in and managing local and international companies - has grown (+315 people per year) [3]. The main challenge for companies who settle in Luxembourg is to find medium or highly qualified workers, who are willing to come to Luxembourg and to stay in the country, as the market is highly competitive. [4]

The Ministry of Labour, Employment and the Social and Solidarity Economy together with ADEM, the Luxembourg PES, the Luxembourg Bankers’ Association (ABBL) and Institute de Formation Bancaire Luxembourg (IFBL) launched the initiative ‘Fit4Finance’ - a pilot as part of a larger programme ‘Fit4job’. The programme is aimed at people who have lost their jobs in the financial sector. The jobseekers are monitored and invited to improve their employability. A diagnostic session is followed by specific training developed for the sector and through collaboration with sector professionals to ensure the requirements of the sector and the jobseeker concerned are met. The Luxembourg tax authorities have published a new regulation (Circular L.I.R. no. 95/2 published on 27 January 2014), which aims to attract foreign workers to Luxembourg in response to a need for skilled and specialised labour in the Grand Duchy[5]. For many employers, the Circular offers opportunities to potentially increase international assignments, and revise their hiring policies. Assignment-related costs (e.g., moving, housing, travel, school fees, etc.) typically represent a heavy financial burden to employers. The Circular may help companies reduce their assignment-related costs through, for example, exemption of relocation expenses. [6]

The ICT sector is constantly gaining importance in Luxembourg. [8] It represented around 7% of the total national Gross Value Added in 2013, which is one of the highest shares in Europe. There were approx. 17 thousand employees in ICT at the end of 2014, which represents approx. 5% of total employment. [9] Increasing demand can be explained by the expansion of the sector. A significant share of ICT companies support other industries, but within the ICT sector itself areas are developing, like the recent boom in data centres that allow internet download and streaming services. Shortages relate to recruitment difficulties: in 2014, approx. 58% of enterprises which recruited or tried to recruit staff for jobs requiring ICT related skills reported problems in filling these positions, compared to 53% in 2012. [10] There are assumptions that Luxembourg’s national policies do not care enough about ICT in education, both for primary and secondary schools. A school survey conducted by the European Schoolnet in 2012 [11] noted a paradox: on one hand, Luxembourg has 96% of its households (with children involved in compulsory education) equipped with ICT devices and internet connectivity; on the other hand, although teachers report to be self-confident in ICT use, many of them do not consider ICT competence in their work plan. [12]

The government launched the strategy “Digital Luxembourg”, where the main objective is to reinforce and consolidate the position of the country in the ICT sector. One element of this strategy includes making the Grand-Duchy attractive for a foreign-qualified workforce. [13] In addition, Luxembourg has lowered the salary threshold in certain professions in the ICT sector so more people can obtain the 'EU Blue Card' [14]. This encourages companies to recruit more highly skilled third-country nationals wishing to settle in the Grand Duchy and having the profile of developers, programmers, analysts and ICT project supervisors. To serve the interests of ICT professionals, on July 15, 2014 “ICTLuxembourg” was established. It is the main active umbrella organisation in the ICT sector serving the interest of its members. [15] In 2015, the Luxembourg PES launched a new partnership with the company NumericAl that uses the WebForce3 methodology to enhance ICT skills. A first result of this partnership is the training programme “Fit4Coding” that is co-financed by the European Social Fund. Over a time period of 18 months, 90 web developers will be qualified in a way that they can immediately enter the labour market as a web developer or junior integrator after having successfully completed the training programme. The first “Fit4Coding” training cycle started in November 2015 with 17 jobseekers who have received intensive training of 490 hours in 3.5 months to prepare skills needed in the field of ICT. The Fit4Coding initiative thus helps to close the gap between the profiles of jobseekers registered with the PES and the demand in advanced technologies in future years [16].

Since 2011, it has become apparent that in the near future, Luxembourg would face a severe shortage of doctors due to the retirement of a significant share of personnel. In particular, there are two thousand general practitioners and specialists working in the Grand Duchy, [18] of whom more than half are aged between 45 and 60 years old and 35% fall into the 45 to 55-year-old age bracket. This means that within the next ten to 20 years, most of these doctors will retire.[19] It is estimated that the Grand Duchy will need around 100 to 150 new doctors annually over the coming years to ensure medical care for the growing population. [20] There is insufficient supply, for example, medical students in Luxembourg can only complete their first year at Medical School at the University of Luxembourg and are then forced to go abroad, where many remain to work after graduation.

Medical students in Luxembourg can only complete their first year at Medical School at the University of Luxembourg and are then forced to go abroad. In order to prevent this, the government decided[21] to start a comprehensive training programme from 2017/18 with an intake of 25 students for the first year, which would then be raised to 50 in the second year. It is expected that the comprehensive training could encourage more students to stay in the country to work. There is the possibility to attract foreigners from other countries e.g. the national labour migration policy is related to economic needs and has an employer based system. The government has put emphasis on attracting highly qualified workers. [22] Possible solutions could be [23]:

to monitor developments within the medical sector in order to have better insight into the demand and supply of occupations in the future; to further exchange information between the Ministry of Health and the Ministry of Higher Education and Research to get more insight and create more possibilities for health students to specialise in order to make use of their potential in the future; inform students about all possibilities for training and work; and 4) make Luxembourg more attractive for medical students.

Shortages for several technical occupations have been identified: logistic engineers, electro mechanic, maintenance mechanic, civil engineer, mechanical engineer. [25] Luxembourg has continuously improved its positioning as an intercontinental logistics hub in Europe especially for contract, air and rail freight-based logistics activities. [26] This relates to increasing demand for logistic engineers. In addition, the government of the country has targeted logistics as a sector that could create skilled (but also lower skilled) jobs. Shortages arise due to the fact that there are not enough HE graduates with the profiles required by employers. Hence, the only possibility is to recruit them from abroad.

To prevent shortages of engineers, a working group Cluster for Logistics [27] is focusing on education and training specifically for the sector. Its members are working closely with public research centres and the university. The university should offer programmes for niche professions that are prioritised by the Government (e.g. logistics, bio-health or ICT). All in all, there is a need for a coherent approach and efficient collaboration between all the stakeholders (businesses, government or research and innovation centres) [28]. The Cluster for Logistics also organises conferences in schools to raise student awareness of the logistics sector and inform them of career opportunities. The Education Workgroup gathers human resource managers from logistics operators and industrial companies. In cooperation with the national Ministry of Education, the Workgroup is focusing on the setup of a dual education programme to instruct logistics technicians. The first programme started in 2014. Participation in the workgroup offers companies a direct and important contribution.