The list below is based on an assessment of the labour market of Italy. The occupations presented are not given any rank. All of them present high mismatch. 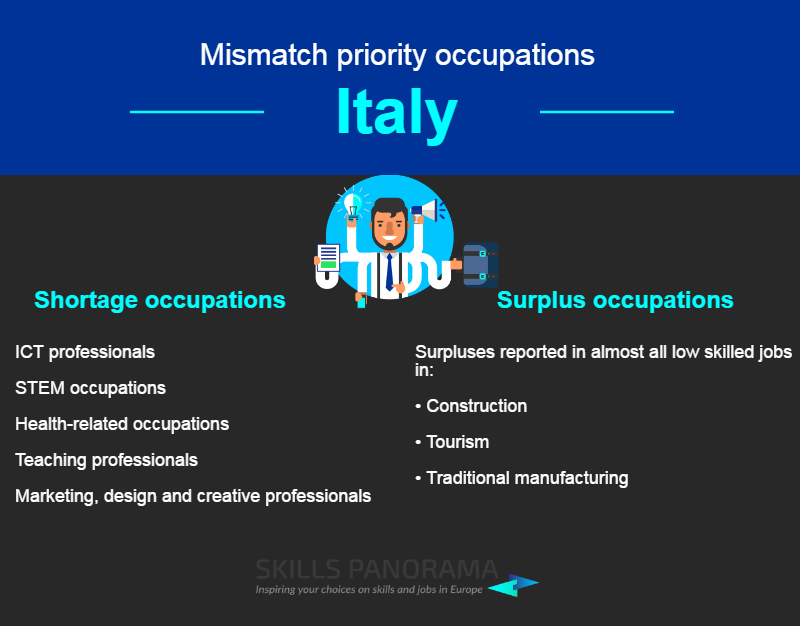 The importance of high-skilled jobs involved in software design and implementation and machine programming is growing, both in the service and manufacturing sectors. ICT professionals in the service sector are characterised by one of the highest expected employment growth rates in the medium term (2% per year from 2015 to 2020). [2] Within this group, various professionals are in high demand:

There are two main reasons for skill shortages:

The lack of ICT professionals is a well-known problem in Italy since the beginning of the new millennium. No common and comprehensive strategy has been designed so far. In general, the Italian labour market is not able to deliver wage premia sufficiently high to encourage students to invest in education programmes which are perceived as difficult and of long duration. There is also a widespread lack of information about the real career prospects and attractiveness of these occupations. Italian universities (with few exceptions) have long-standing difficulties in developing ties with industries in order to foster collaborations and facilitate and speed up the transition from education to the labour market. This is due mainly to the lack of funds but also of specific expertise and incentives in linking the education system with the industrial sector. Since 2015, a tax deduction for investment in research and development has been granted to all firms. Furthermore, the Ministry of Finance grants a tax deduction for firms which hire new graduates with specific contracts aimed at conducting research activities with universities in order to obtain university or postgraduate degrees (such as PhD). These measures are expected to raise private R&D investment, although the implications in terms of job creation are still to be assessed.

Employment in these occupations is expected to grow faster than the Italian average in the medium term (3% increase against an average, which is below 1% in the period 2014-2018). [7]

The main reasons for skills shortages include:

Science graduates have a negative wage premium with respect to economics graduates. In addition, they experience worse labour market outcomes such as a higher unemployment rate [9] and lack of skills necessary for the tasks required. Companies report high levels of training required, which is associated with difficulties in finding the required skills in the market. [10] In addition, there remains a substantial gender gap in scientific occupations which are male dominated (about 80%). A similar pattern is reflected among university graduates. [11]

As in the case of ICT professionals, the shortage of STEM specialists is a well-known problem, which is still not addressed properly. Italian universities (with few exceptions) have long-standing difficulties in developing ties with industries in order to foster collaborations and facilitate and speed up the transition from education to the labour market. Since 2015, a tax deduction for investment in research and development has been granted to all firms. Furthermore, the Ministry of Finance grants a tax deduction for firms which hire new graduates with specific contracts aimed at conducting research activities with universities in order to obtain university or postgraduate degrees (such as PhD). With reference to technicians, since 2012 high specialisation technological schools (ITS) have been introduced. ITS aim at providing technical and technological competences specifically tailored to the industrial specialisation of the region. These schools provide a level of education equivalent to level 5 of the European Qualification Framework. Currently in Italy there are 86 ITS offering different programmes mainly within the STEM area. Preliminary analysis on the first waves of graduates show that these schools are very effective in providing the skills and competences required by the market and therefore offer good labour market prospects. [12]

For the period 2015-2020 employment in the health sector is expected to increase at approx. 2% per year - well above the national average rate, which is below 1%. [14] This will drive the growth of all health-related occupations. The reasons underlying the expected shortages are twofold: on the one hand, the ageing of the population will bring an increase of all occupations that are associated with heath and healthcare; and on the other hand, these occupations will be affected in the medium term (5 years) by massive staff turnover due to the age structure of the workforce. It is expected that in the medium term the turnover of medical doctors and nurses will be above 30%, mostly due to replacement demand. [15] It is unclear whether the expected demand will be met by an increase in supply or if there will be substantial shortages. The demand for health-related occupations in fact is largely determined by the State as hospitals and related institutions are predominantly public. This implies that wages are set centrally through national contracts and do not reflect relative scarcities (related to particular specialisations or regions) e.g. doctors have almost the same wage irrespective of their type of specialisation and place of work. Moreover, the number of students enrolled in medical degrees (medicine health-related degrees) and in subsequent graduate schools of medicine [16] is predetermined by the Ministry of Education and there is a risk that these numbers will not be determined according to the expected level of demand.

The government is currently designing a reform of the access to medical degrees and also to graduate schools. At this stage it is not clear which direction will be taken. The health system in Italy is funded under the regional budget and there are different types of approaches. Albeit predominantly public, in some regions there is a private health system which is on the same foot as the public one (private hospitals receive a reimbursement from the state for treatments provided). In the private sector the market for health professionals is more flexible with wage premia and demand responding more adequately to shortages and skills needs. More flexibility should be introduced in the public health system allowing wages to reflect relative scarcities (related to particular specialisations or regions) and skill differentials. At national level, more thorough planning should be made in order to match the supply of young graduates with the expected trends in demand.

The education sector is expected to experience a modest increase in employment in the medium term (below 1% per year in the period 2015-2020). However, there will be strong demand for teachers at various levels due to the high number of retirements that are occurring and are expected to continue in the next few years. Overall the expected staff turnover in the education sector will be approximately 20% in the next 5 years. [18] Similar problems arise in universities. On the one hand, the high level of retirements considerably reduced employment, on the other hand, the austerity measures implemented in Italy since the 2008 crisis froze public hiring at all levels. One of the reasons for shortages in the education sector is the inefficient territorial distribution of the supply of teachers. The geographical mobility of public sector employment is low due to:

Often shortages are only at local level but due to the low mobility of public sector employment, they tend to become structural. In 2015, the Italian government introduced a new centralised system for allocating teaching professionals which is expected to increase the efficiency of the allocation of teachers. The government is tackling the shortage by programming specific hiring plans. One was implemented in 2015, another is expected in 2016.

The development of new technologies and new communication tools has brought a drastic change in several occupations, for example: marketing sales and public relations professionals need to use more and more extensively the internet and social media; and architects, planners and designers need to adapt their products to new technologies (accessibility through different devices). For the latter occupation group, and in particular for architects, there is a growing demand for green competences as customers are increasingly concerned about environmental impact. The shortages in these cases relate more to lack of skills required by employers than to insufficient number of professionals. Demand is concentrated in specific occupations that require a combination of technical and creative skills which are not easy to find.

No specific policy actions have been implemented. At the same time remains a need to develop tools and instruments for updating skills and competences as technologies in this field evolve rapidly.

Surpluses are present in almost all low skill occupations but are concentrated in three sectors:

All surplus occupations are affected by the rapid transformation of production processes, particularly in manufacturing. This implies that the skills requirements of occupations are evolving e.g. even simple manual jobs now require a complex set of activities and the ability to use machines and computers. Therefore, the need for training in order to up-skill the labour supply and foster its employability is to be taken into consideration

At local (regional) level, several initiatives have been implemented to provide lifelong training for the employed. For the unemployed, specific training initiatives were also undertaken. Over the last 10 years the Italian regional governments have repeatedly reformed the apprenticeship contracts. Overall, these contracts account for approximately 15% of total employment. They foresee compulsory training by the firm which in turn receives a tax incentive if the apprenticeship contract turns into a standard employment contract. In general, apprenticeship programmes are successful in facilitating the transition from education to the labour market.[30]

[5] There is no aggregate data at national level. There is regional data, however, it is not entirely comparable. According to OECD education statistics, in Italy the share of graduates in mathematics and statistics is 1% well below the European average.

[8] There is no aggregate data at national level, there is regional data; however it is not entirely comparable.

[15] ISFOeorkers oryhave been used to draft the PPAM.ISFOL.or Survey, from the Survey oach similar to the one followed by Cedefop ()camerL, INAPP: Public Policy Innovation http://professionioccupazione.isfol.it and Sistema Informativo Excelsior http://excelsior.unioncamere.net/

[16] The standard education pattern for doctors is first to take a degree in medicine (6 years) and subsequently to enrol in a postgraduate school choosing the type of specialisation (i.e. cardiology, internal medicine, surgery etc.)

[18] Sistema Informativo Excelsior, Occupation forecasts 2015-2020.eorkers oryhave been used to draft the PPAM.ISFOL.or Survey, from the Survey oach similar to the one followed by Cedefop ()camer

[20] Istat National Accounts.eorkers oryhave been used to draft the PPAM.ISFOL.or Survey, from the Survey oach similar to the one followed by Cedefop ()camer

[25] Istat National Accounts.eorkers oryhave been used to draft the PPAM.ISFOL.or Survey, from the Survey oach similar to the one followed by Cedefop ()camer

[30] ISFOL, XV rapporto sull’apprendistato,2015eorkers oryhave been used to draft the PPAM.ISFOL.or Survey, from the Survey oach similar to the one followed by Cedefop ()camer