The list below is based on an assessment of the labour market of Germany. The occupations presented are not given any rank. All of them present high mismatch. 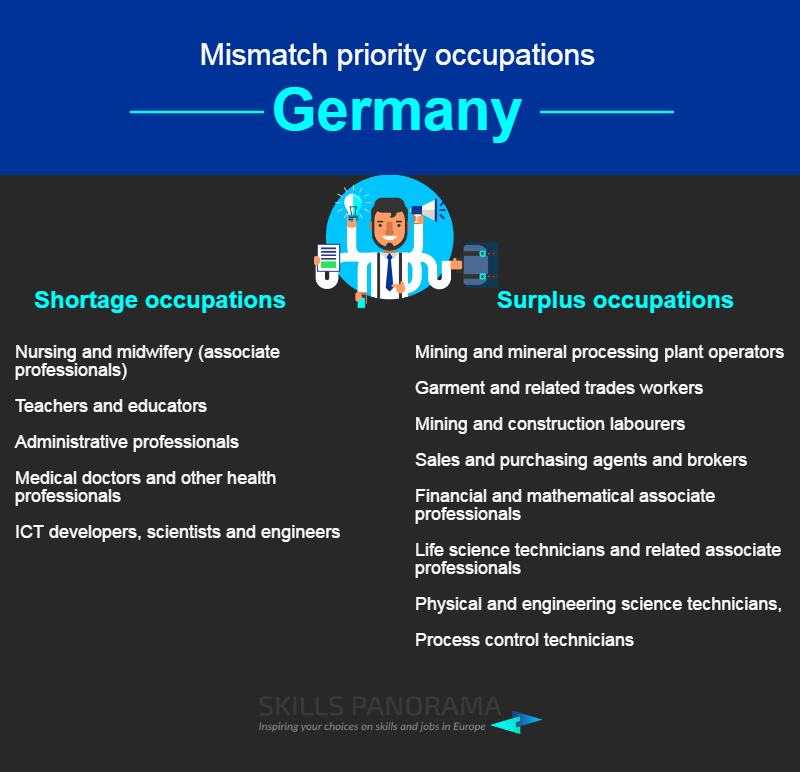 The labour market for nursing and other associate health professionals has shown continuous signs of shortages. [2] Qualified nurses and midwifery professionals were among the top occupations in 2013, for which employers experienced recruiting difficulties. [3] Vacancies remain partly unfulfilled because qualified staff is scarce. There is a reported general shortage in most specializations of the (associate) professional health occupations. [4] Healthcare qualifications were also ranking high in potential shortage occupations of the labour market forecast up to 2030 of the German Ministry of Labour and Social Affairs. [5] Besides the growing demand facing the sector, it also faces insufficient supply, as for instance, young people are less willing to be trained in these occupations. The insufficient supply reflects the working conditions and career opportunities in most of the occupations. There is high staff turnover, a high amount of work pressure, and unfavourable work conditions (night shifts, working on weekends, holidays). While the initial salaries are good, the career prospects are limited. Thus, health professions are among the occupations that were identified as shortage ones. [6] While there is a significant group of people taking up qualifications in nursing, the work circumstances and salary leads to a significant outflow of persons from the profession. Midwives have the additional problem that, especially in the context of private practices, are required to carry on high costs of liability insurances, which diminishes factual salaries significantly. Nurses (Professional / Associate professional) are, along with several other health related professions included in the list of skills shortage occupations related to migration and work permits for migrant workers. [7]

Possible solutions that could tackle with the problem of shortages refer to: a) activation of non-participating people with health qualifications that are currently not on the labour market; b) acceptance of (foreign) qualifications in health related occupations, potentially with an upskilling towards the necessary level of qualifications of German standards.

There are signs of shortages among ‘University and higher education teachers’, ‘Other teaching professionals’, and also ‘Vocational education teachers’. These reflect shortages that have appeared in the past or are currently encountered in specific regions and / or within specific sub-fields. While there is an expected decrease in the number of teachers and educators for the future [9], the current demand is high. A high shortage of educators has been the result of the extension of nursing schools and pre-school education. Due to increases in pre-school programmes and places, many regions were and are still facing shortages of educators of pre-school institutions. The degree of shortage of teachers is mixed, ranging from limited to no shortages in the recent past (e.g. Bavaria) to severe shortages in other Länder of Germany (e.g. Berlin). In many cases, the shortages are specific to the specialisation of the teacher or a region. In addition, the recent influx of refugees and programmes to allow for integration of these refugees into the German labour market has sharply increased demand for teachers, especially to teach German to foreigners. This is, however, likely to be a temporary phenomenon. Teachers require a formal two-year qualification (Refrendariat) which is remunerated well below other starting positions of comparable graduates. While starting salaries and working conditions as teachers are good, career prospects in terms of wages and responsibilities are lower than in other occupations. In addition, tenured positions are not easily obtained. Currently, new inflows are predominately female dominated and there is a relative preference for part-time positions once employed thus factually diminishing the supply.

A high shortage of educators has been the result of the extension of nursing schools and pre-school education. Due to the increases in the number of pre-school programmes and places many regions were and are still facing shortages of educators. There have been attempts to re-train workers to become pre-school educators. [10] However, especially for this level of educators, acceptance of foreign qualifications has been mixed. Recently, salaries within pre-schools have increased to reduce the gap with primary school teachers, following a series of labour conflicts. At the secondary school level attempts have been made to attract practitioners from related fields by offering programmes to integrate and accept their qualification as equivalent. [11]

This group of occupations encompasses those in the direction of business as well as those more in the realm of social sciences. While the overall importance of these occupations in terms of the share of employment in Germany seems to be high, there are no specific problems of accessibility to studies leading to degrees that are usually obtained by graduates populating these occupations. In some contexts, e.g. finance and accounting, prolonged study periods (specialised training periods) and limited access to post-graduate degrees could lead to some (temporary) shortages. Generally, these occupations do not necessarily require specific programmes. Most occupations are in the free market allowing wages and work circumstances to improve until supply and demand are equalized.

Medical doctors and other health professionals [13]

Key occupations include medical doctors and other health professionals e.g. dentists, pharmacists, physiotherapists, dieticians and nutritionists, speech therapists. Medical occupations and healthcare qualifications rank highly in potential shortage occupations in the labour market forecasts to 2030 of the German ministry of Labour and Social Affairs. [14] Due to upcoming retirements of a large cohort of current doctors, a shortage of general practitioners is expected for rural areas. In 2013, 42% of all doctors were 55 years or older. [15] Specifically, the general practitioner (family doctor) may be considered a shortage specialisation. The qualification to medical doctor is, as in all countries, regulated and involves a period of specialisation beyond the graduation. Access to medical studies as well as to qualifying positions is limited in Germany.

There are several measures that promote the employment of young doctors in rural areas. One example is where the region provides doctors with equipped working space or wage guarantees. These are usually regional initiatives given the organisation of medical care in Germany. However, given the financial administration around the financing of the medical care (organized through a combination of public and private insurances), the financial reward of the occupation varies across regions. Medical doctor is one of the academic shortage occupations [16] that foreign migrants can use to apply for a work permit (Blue Card) with a reduced income requirement. [17] There is an international market for medical doctors. Germany both benefits from the influx of medical doctors from abroad (specifically from within the EU), while it also loses some of its graduates to other countries. [18] In the past, Germany has managed to keep the overall shortage at bay using foreign graduates. [19] There are several programs that try to attract foreign migrants especially into medical specialisations with shortages. In addition, there are regional programs to ensure coverage especially for general practitioners.

Various occupations in ICT and engineering are identified as potential shortage occupations, specifically at the highest level. While the overall statistical indicators, based on the Eurostat results, are less clear on potential shortages, more specialized studies indicate current and expected future shortage. [21] Engineers have experienced strong growth in past years that could also be fulfilled by additional graduates. The forecasts up to 2030 show a continued strong demand of engineers, scientist and ICT specialists, which relates (among other things) to the continuous move to digitisation of the economy on the labour market. [22] In comparison, supply is somewhat under pressure through demographic changes. Another issue of concern is students in STEM qualifications not finishing their qualification. There is still low participation of women in these occupations.

Most academic STEM occupations are on the government’s list of shortage occupations [23] that foreign migrants can use to apply for a work permit (Blue Card) with a reduced income requirement. [24] The technical industry and the engineering associations are campaigning among students and pupils to foster interest in the technical field. In addition, sector organisations have initiatives to identify, publicize and tackle these issues. [25] While most STEM occupations are well remunerated, detailed specialisation and technological change requires continuous training and schooling. Hence, employees in STEM occupations who lose employment at older ages, and who are not within the specialisations in high demand, can face difficulties finding re-employment. This is both a problem of adjustment in specialisation and in employer’s flexibility towards age expectations.

At the intermediate level, many sources point to existing and future shortages in the technical occupations. Occupations in machine building and electro-technical fields and crafts show shortages already at the level of vocational training applicants. This shortage is likely to increase given demographic changes and the increased inflow of students into higher level qualifications. [26]

Shortages at the intermediate level, especially in apprenticeship positions, lead to a simplified inflow of refugees and migrants into such positions. [27] There are many regional activities trying to attract young graduates into technical occupations. Some of these activities concentrate on groups that are relatively weak in taking up such professions: females and students with foreign backgrounds. By extending beyond the traditional groups enrolling in qualifications for technical occupations it is attempted to match future supply with continued (high) demand. Recently, re-training of foreign migrants and refugees are proposed especially for these shortage occupations.

Surpluses have been identified for the following occupations [28]: mining and mineral processing plant operators’; garment and related trades workers; mining and construction labourers; sales and purchasing agents and brokers; financial and mathematical associate professionals; life science technicians and related associate professionals; physical and engineering science technicians; process control technicians. Reasons for skills surpluses relate to significant declines in the labour force in specific sectors, but also a shift from middle level occupations to higher occupations as a result of outsourcing to other countries and automation of the production process. [29] This results in less formalized work contracts and temporary employment through manpower organisations, especially within surplus occupations.

In the context of intermediate level technical and administrative occupations [30], an upskilling of the existing workforce towards higher level occupations might be considered. However, shortages in higher level occupations might also lead to an increased and renewed demand for intermediate level occupations. This is much less the case for surplus occupations in mining and in garment and related trades workers. Given the sector’s development, a reduced inflow (supply) through the dual system seems likely. This forms an automatic limit to future graduate inflows mitigating the surplus. There are no specific programs to deal with surpluses; however re-training of unemployed (in these and other occupations) usually allows to retrain towards qualifications of occupations in higher demand (shortage occupations).

[5] See especially chapters 2 and 4 in: Vogler-Ludwig & Düll (2012): The German Labour Market in the Year 2030 – A Strategic View on Demography, Employment and Education.

[14] See especially chapters 2 and 4 in: Vogler-Ludwig & Düll (2012): The German Labour Market in the Year 2030 – A Strategic View on Demography, Employment and Education.

[18] See the chapter on migration on medical professions in the OECD Migration Outlook 2015.

[27] See for the apprenticeship in the crafts Read more: http://www.zdh.de/ ; or more general Vocational training and learning. See more: http://www.make-it-in-germany.com/en/for-qualified-professionals/training-learning