Electroengineering workers, or electrical and electronics trade workers fulfil a variety of roles which involve installing, fitting and maintaining electrical wiring systems and machinery, as well as other electrical equipment.

Around 3.4 million people were employed as electro-engineering workers in 2018.  Employment in the occupation, following the financial crisis in 2008, fell by 14.9 per cent between 2006 and 2018. Employment is projected to decrease by 5.9 per cent over the period 2018 to 2030 – a loss of 200,000 jobs. This underestimates the true level of employment demand. In order to replace those workers who will leave the occupation for one reason or another – an estimated 1.5 million between 2018 and 2030 – despite the projected decrease in demand over the same period, this means that around 1.3 million job openings will need to be filled. In the workplace, gathering and evaluating information, creativity, resolution and autonomy are the most important tasks and skills of electro-engineering workers. Around 70% of electro-engineering workers held medium-level qualifications in 2018; more or less the same proportion projected for 2030.

According to Eurofound's Job Monitor, gathering and evaluating information, creativity, resolution and autonomy are the most important tasks and skills of electro-engineering workers.

Figure 1: Importance of tasks and skills of electro-engineering workers 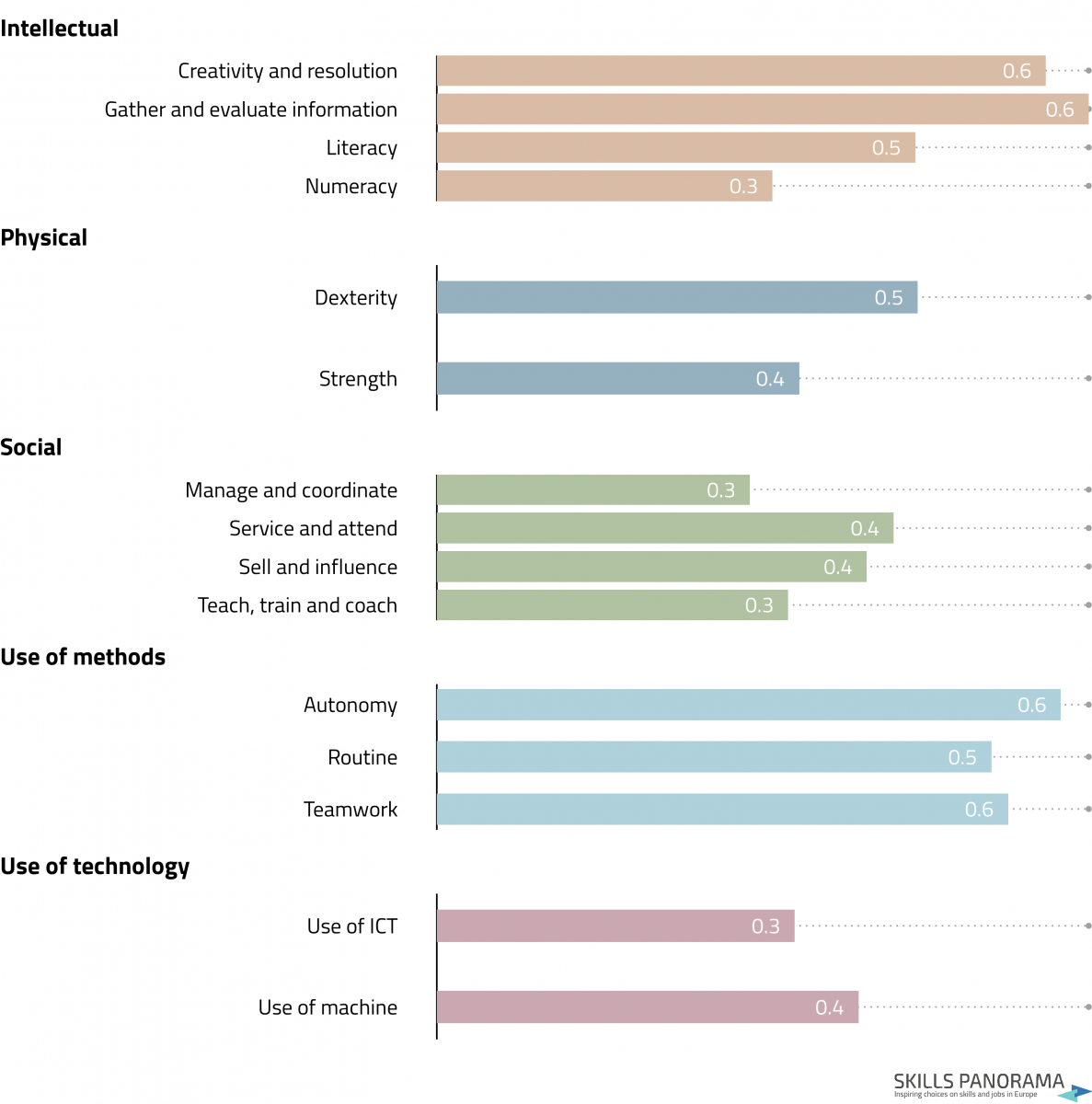 Note: The importance of tasks and skills is measured on 0-1 scale, where 0 means least important and 1 means most important.

What are the trends for the future? [2] 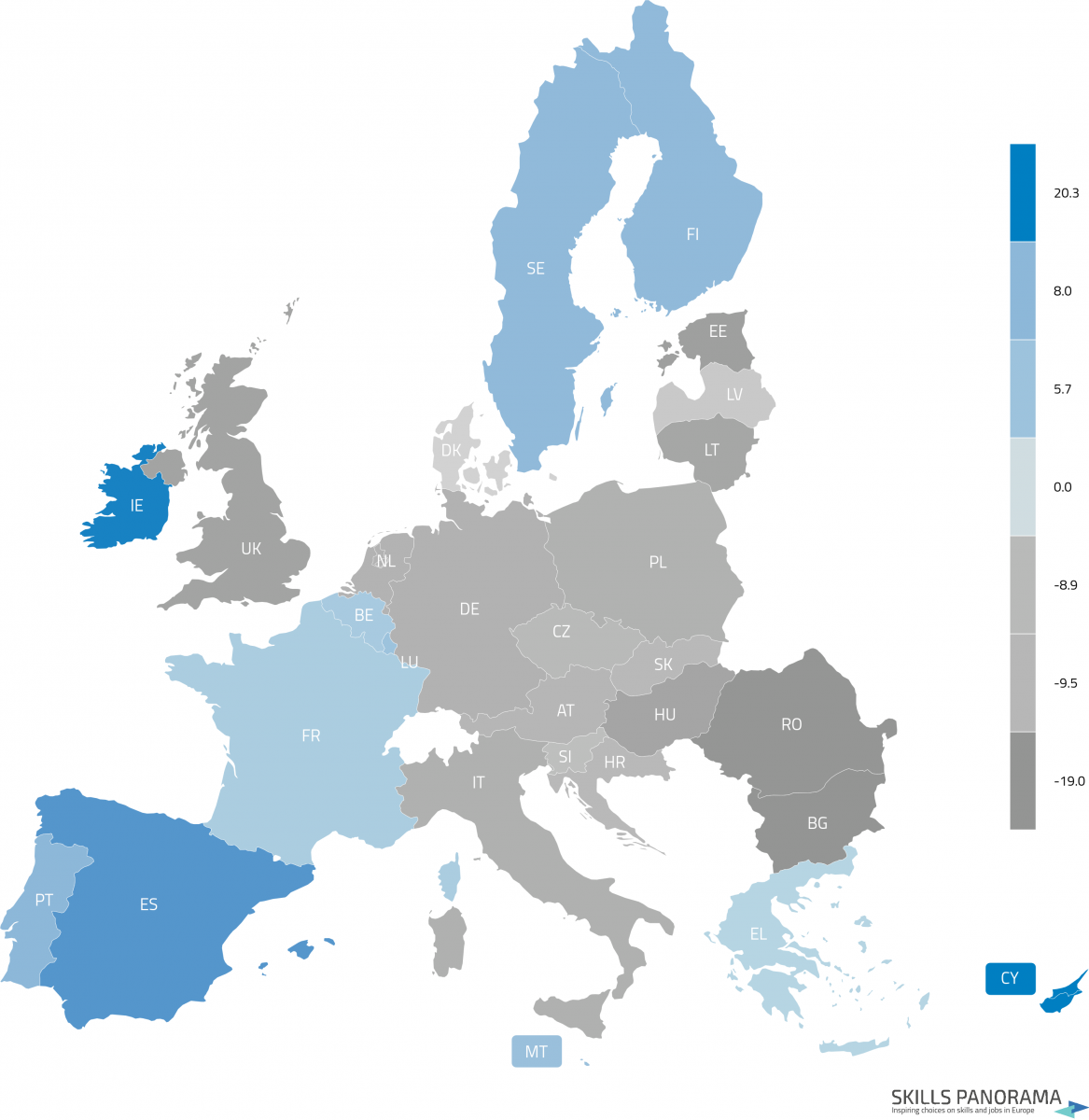 Over the period 2018 to 2030, an estimated 1.5 million people are projected to leave the occupation for one reason or another, such as retirement (‘replacement demand’ [3]). Given the projected decrease in employment over the same period, this will result in there being around 1.3 million job openings that will need to be filled between 2018 and 2030.

More information on employment trends for this occupational group can be found here.

Which drivers of change will affect their skills?

Trends in the key sectors employing electrical and electronic trade workers affect the demand for these workers and their set of skills. Regarding construction, the most significant employer of these workers, the economic downturn of 2008 had adverse effects on activity levels and thus, employment of all relevant occupations. Manufacturing is also struggling with long-term declining employment levels [4], which in turn affects a significant share of electrical and electronic trades workers.

More specifically, drivers of skill needs can be identified among electrical and electronic trades workers:

increased automation, may reduce the demand for these workers, working from building construction sites to retail stores repairing vehicles, as machinery/robots now carry out many of the jobs previously held by skilled manual workers [5] .At the same time, this driver changes the skills mix required, across sectors. Higher level of skills are needed, such as the ability to diagnose faults in automated systems and fix them accordingly, or to be able to implement, operate and maintain automated systems (to be found in a range of industries, from telecommunications to construction). However, automation can result in the simplification of these workers’ job tasks, reduced to identifying faulty components and then replacing them, rather than engaging in the repair of a faulty component [6]. technological advancements, especially electronics /information communication technologies (ICT), are increasingly being embedded in all types of products. [7] As computers and electronic systems, such as global positioning systems (GPS), are increasingly integrated into automobiles [8], workplaces and households, there is likely to be demand for electrical and electrical trades workers with specialist technical skills in installing, maintaining and servicing such systems (c.f. the internet of things) [9]. The increasing use of electrical devices / electronics in buildings – e.g. installing mobile and static antennae on buildings or masts – is also expected to increase the demand for electrical workers in construction. [10] the transition to a low carbon economy and the increasing adoption of ‘green’ technologies, including ‘green’ energy generation, will likely require electrical and electronic trades workers to develop relevant new skills. The demand for these workers who can learn and apply specialist skills in new / changing situations (e.g. wind turbines and working at heights) [11] will be also stimulated. The need to improve energy efficiency will also increase the demand for skills related to the installation and maintenance of energy saving elements within buildings [12].

Risk of automation: As a part of its Digitalisation and future of work project, Cedefop estimates the risks of automation for occupations. The most exposed occupations are those with significant share of tasks that can be automated – operation of specialised technical equipment, routine or non-autonomous tasks – and those with a small reliance on communication, collaboration, critical thinking and customer-serving skills. The risk of automation is further accentuated in occupations where employees report little access to professional training that could help them to cope with labour market changes. Electro-engineering workers are reportedly an occupation with average risk of automation. 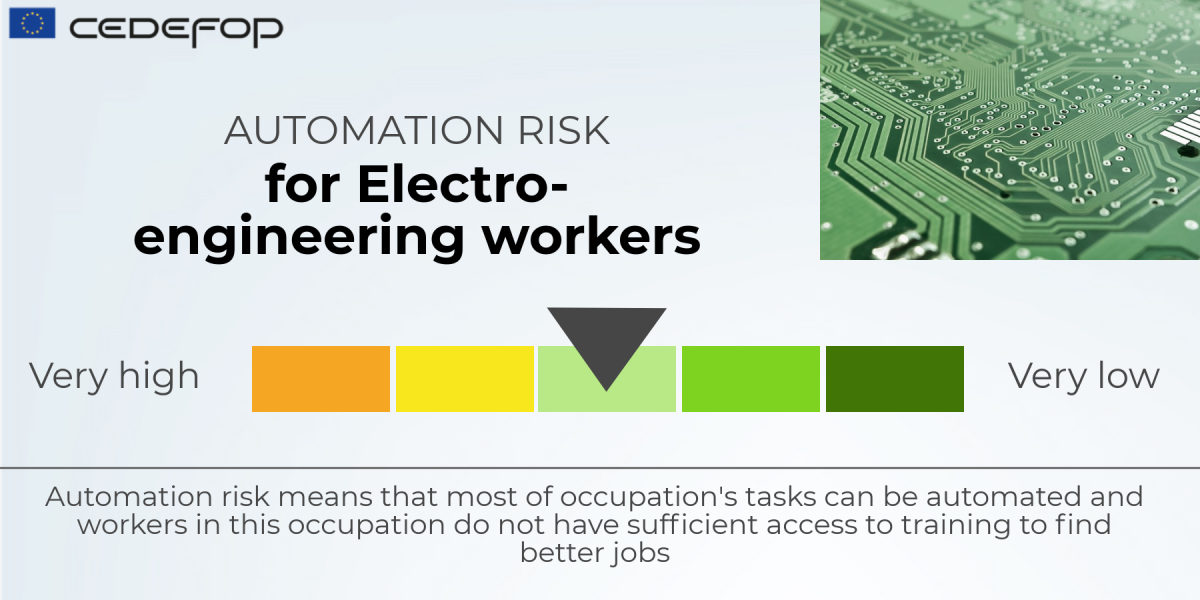 “Today’s electrician has become a high-tech worker. Buildings are increasingly run by complex systems that use computer processors, sophisticated controls, fibre optics, and other networking gear. Building electricians increasingly handle ICT in relation to building automation. Building automation is the automatic centralised control of a building's heating, ventilation and air conditioning, lighting and other systems through a Building Management System or Building Automation System. This means that electricians who install such systems and maintenance workers who monitor them have to be almost as skilled as the people who designed the equipment.”

Source: Ecorys / DTI, (2016), The impact of ICT on job quality: evidence from 12 job profiles- An intermediate report from the study "ICT for work: Digital skills in the workplace – SMART 2014/0048", Report prepared for the European Commission DG Communications Networks, Content & Technology

How can these skill needs be met?

At the same time, all sectors employing electrical and electronic trade workers will experience a significant exit flow mainly of retirees; and so the need to replace them with well-trained workers could have significant implications on the firms’ productivity and sustainability. Besides engaging in and supporting quality apprenticeships (for example, by offering placements), employers could benefit by fostering continuous training of their workers. As with all occupations, especially those relevant to high-end technologies, technological developments can easily and fast outpace the skills levels of electrical and electronic trade workers who are not sufficiently exposed to up- or re-skilling. This can be offered by industry associations and workers’ organisations, in-company training, or active labour market policy measures aimed at unemployed people, as suggested for example, in the building construction sector. [14]

[3] Regarding the need to replace workers leaving a profession for various reasons, such as retirement, more information can be found concerning replacement demand and how it drives employment on the Skills Panorama;

[4] Cedefop, (2016), European Sectoral Trends for the Next Decade Available here.

[7] European Commission, (2016), Report shows digital skills are required across all types of work, also for jobs outside the office viewed 20 July 2016

[8] APRC, (2014), Recent trends in manufacturing innovation policy for the automotive sector: a survey of the US, Mexico, EU, Germany, and Spain