The list below is based on an assessment of the labour market of Belgium. The occupations presented are not given any rank. All of them present high mismatch. 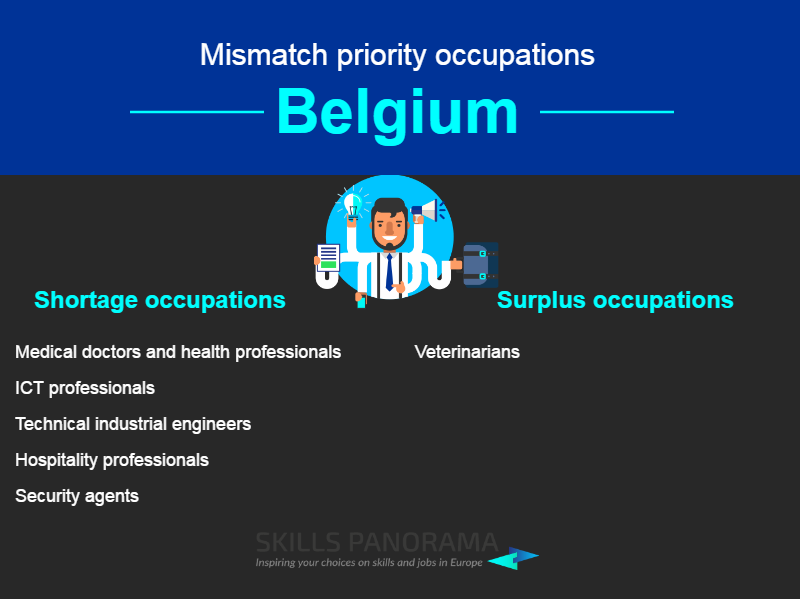 Shortages exist in the health care sector, particularly in the nursing profession. Reasons for this relate to recruitment problems, ageing of the population (due to higher demand), unfavourable working conditions (extended working hours), social and technical developments (new/other skills) as well as budgetary and political choices (budget cuts). [2]

Recruitment problems can be explained by the possible lack of candidates with the desired profile as well as with the fact that often wages are not proportional to the requested technical competences. In the Walloon region, in 2014 there were more than 1 thousand unfilled vacancies for nurses and 279 vacancies for specialized nurses [3]. In 2015, vacancies for geriatrician, neurologist, emergency doctor, paediatrician and child psychiatrist were hard to fill in the Flemish region. [4] Also the Brussels Capital Region PES identified hospital, geriatric, social and head nurses, physiotherapists and occupational therapists as bottleneck occupations for 2014. [5] Reasons for shortages vary depending also on the occupation. For example, shortages of specialised doctors depend on the specialisation. In comparison, opticians represent a bottleneck as the combination of medical knowledge with sales skills is not common and there are little training possibilities for this occupation. In the case of nurses, vacancies are difficult to fill due to heavy workload (extra working hours, night and weekend shifts). In addition, they need to undertake additional training to be able to deal with different aspects of well-being of patients. Furthermore, nurses are increasingly required to use digital skills and thus ensure the quality of provided care [6]. Given the working conditions, some of these professionals choose to work part-time or to retire early.

The “Care Ambassador” regional initiative was carried out in Flanders from 2010 to 2014 with the aim to support the inflow of people in the healthcare sector with a focus on nurses, carers and nurse auxiliaries. [7] Since the start of the initiative the inflow of “generation students” –i.e. students who enrol for the first time in higher education immediately after finishing high school (mainly 18-19 year olds), in the Nursing Bachelor programme increased. The total number of students studying Person Care in vocational secondary education (BSO) and technical secondary education (TSO) also increased. At the same time, the number of nurse/carer vacancies in Flanders decreased. The “Care Ambassador” initiative is continued in Action plan 3.0 ‘Make work of work in the health and social care sector’ [8]. The campaign ‘A job in (health) care: I go for it’ [9] is actively seeking young people and people willing to change their career to make a change into the (health) care sector (campaign started in 2011). According to the Flemish PES, nursing is a classic bottleneck occupation. Even though raising the retirement age and the increasing number of pupils had some positive effect, it is not enough. In order to increase the inflow of nurses the following regional government initiatives have also been established [10]: job seekers can attend nursing education while maintaining their benefits, employees in caring functions have the right to use study facilities, nurses with a foreign education background are encouraged to obtain a degree in nursing through a shortened training program, the entry of returners (out of the labour market) is supervised and nurses are recruited from other countries (e.g. the Netherlands).

Total employment in the ICT service industry in Belgium has increased over the years despite a slow-down after 2008. In total, the workforce consisted of 187 thousand ICT practitioners in 2012 which was 4% of the total workforce in Belgium. The demand for ICT professionals is forecasted to triple by 2020. In 2012, it was estimated at 7.6 thousand and forecasted at 30 thousand for 2020. [12] Flemish PES [13], Walloon PES[14] and Brussels Capital Region PES identified that there is a shortage of ICT specialists (in the Flemish Region: integration and implementation experts, ICT business analysts, analyst developers, managers of ICT staff and database/network administrators; in Walloon Region – ICT operation managers, ICT/web developers and ICT analysts; in Brussels Capital Region – heads of computer science, software engineers, system/functional analysts, system/analyst programmers and ICT helpdesk technicians). Reasons for shortages relate to growth occupations that require a mix of skills that are not readily available on the labour market, for instance, the combination of knowledge in various ICT related areas, leadership and communication skills (e.g. integration and implementation experts [15]) or the mix of knowledge and understanding of the internal business processes and soft skills (e.g. ICT business analysts). For many ICT functions it is necessary to have a higher degree of education and to keep up to date with developments within the ICT sector. This requires time, energy and investments. Other reasons for shortages have to do with a lack of experience and knowledge of several foreign languages. [16]

The outlook for the coming years is dominated by a number of challenges that need to be addressed: attracting more students to ICT in higher education; improving human resource management (particularly career management) in the ICT industry; financing the needs of the system of continued vocational training in ICT, which is until now the most efficient way to reduce the skills shortage (at least in the short-term). [17] There are a number of broader initiatives related to promoting STEM including ICT. For example, a STEM-policy was developed to make science and technology more attractive to students, raise the number of students in higher education STEM studies and create a higher number of professionals in science and technology sectors. A STEM reference framework and many support measures were developed to help schools implementing a quality STEM policy. In addition, the ICT federation AGORIA (Federation of the Technology Industry) took action to raise awareness about shortages in the ICT workforce. They created the “Technoteens” portal intended to make young people aware of technology. Furthermore, the initiative gives young people opportunities to visit a variety of tech companies and get in touch with technology. Another activity undertaken by AGORIA is “because I’m Techie” within the framework of the e-skills 2016 [18] campaign. This is a skills competition, awarding innovating technologies to young people.

The Flemish Region PES [20], Walloon PES [21] and Brussels Capital Region PES [22] identified shortages of technical industrial engineers. The main reasons for shortages are insufficient supply of graduates and low popularity of technical science among young people in general and among girls in particular. For example, for the academic year 2015-2016, only 262 students chose electro mechanics for a bachelor programme and 33 for a master degree [23]. Additionally, for some occupations (e.g. HVAC technicians) different certificates are needed in order to access the profession which makes it even more difficult to attract students. Another reason for shortages relates to higher employer requirements regarding technical knowledge and specific expertise e.g. (mechanical engineers), but also management capabilities, leadership skills, being multilingual well as other soft skills (e.g. technical managers, technicians in the natural and applied sciences). A further for shortages is the lack of specific education programmes like in the case of technical draftsmen. [24]

At national level there are no specific policy measures. The ‘Choose STEM’ initiative [25] aims to attract more technicians and to guide young people into technical, scientific and engineering education programmes. Efforts are made also at secondary education level to attract more young people for these pathways. [26] Due to the internationalisation of the labour market and the European mobility of workers, employers try to attract workers from abroad to overcome their shortages. [27] In accordance with the Belgian labour migration policy, exemptions from the standard procedure (which aims only at specific labour demands) are granted to broader categories of foreigners. In this way the standard procedure is circumvented. [28]

The Belgian hospitality sector has largely reflected wider economic performance, growing at approx. 3% per annum between 2000 and 2010. There was a contraction in both GDP and hospitality sector turnover in 2009, as a result of the global economic downturn. GDP recovered slightly to 2010. However, the recovery in the hospitality sector has been stronger, driven by, amongst other things, a reduction in the VAT rate applied to the restaurant and catering sub-sectors. [30] In the hospitality sector, the food and beverage sub-sector is accounting for approximately 80% of turnover in the sector. Belgian restaurants are the largest sub-sector in the hospitality sector by some margin, accounting for 53% of the total hospitality sector turnover and 58% of employment. [31] According to the Flemish PES, there is a high demand for hotel, kitchen and hall staff. [32] Similar bottleneck occupations and reasons for shortages exist in the Walloon Region [33] and Brussels Capital Region [34]. The reasons for shortages vary depending on the specific occupation e.g. shortage of room maids is explained by lack of competences and specifics of vacancies (usually a part-time job is offered which leads to an unemployment trap). Hotel receptionist and waiters are bottlenecks mainly due to unfavourable working conditions (low wages, work at night-time and weekends) and high expectations of employers (e.g. speaking at least three languages French, Dutch and English). Chef cook is a shortage occupation because the supply of chefs from hospitality education remains insufficient. Recruitment problems arise also from the low qualifications of candidates and lack of experience.

Government stimulus, via the extension of the reduced VAT rate following the 2009 recession, has had a positive impact on the sector, with turnover in the restaurant sub-sector increasing by 11% in 2010. [35] There are no additional government initiatives to overcome shortages of hospitality professionals. A non-governmental initiative within the hospitality sector concerns a range of internships offered to undergraduates and graduates. Within the hospitality and tourism sector there are at least 14 types of internships [36]. The sector organisation Horeca Vorming [37] provides training for job seekers willing to work in the hospitality sector.

The PES for the Flemish Region reported “security agent” as a shortage occupation in 2014 with over 2 thousand vacancies going unfilled. [39] In comparison, the PES of the Walloon Region and the PES of the Brussels Capital Region did not identify security agent as a bottleneck occupation. [40] Reasons for shortages relate to unfavourable working conditions (safety issues, night shifts, working on weekends), which make the occupation less attractive to potential employees. The demand for security agents is growing in the region; however, it is more so for specialists with more advanced sets of skills (language and soft skills[41], ability to use software, etc.). Employers also seek specialists with the right attitude and flexibility. [42] The increasing demand relates also to the fact that security agents/guards are increasingly becoming partners of law and order services.

The PES of the Flemish Region offers, together with G4S a market leader in security solutions, a free training for jobseekers to become a security agent. If someone passes the selection tests, G4S gives a so-called recruiting promise - G4S is committed to provide a job offer for at least three months within a year after obtaining the training certificate for security guard.

Evidence provided by the University of Ghent suggests that there is a surplus of veterinarians [44]. This concerns mostly small and household animal veterinarians; there is still demand for veterinarians of large animals (in agriculture). No further action is taken regarding this potential surplus.

[29] Not in the list but evidence support there are shortage in the hospitality sector.