Machines, robots and the threat of automation to EU jobs

With forecasts that nearly half of all jobs in advanced economies may be potentially automated , it is no surprise that 72% of EU citizens fear that technology may ‘steal people’s jobs’ .

The rebirth of Talos[1]?

With forecasts that nearly half of all jobs in advanced economies may be potentially automated[2], it is no surprise that 72% of EU citizens fear that technology may ‘steal people’s jobs’[3]. Such a bleak picture about the 4th industrial revolution is not entirely unfounded; some highlight the significant differences with previous industrial revolutions[4], with its faster innovation cycles, rapid product prototyping and marketing capabilities for firms, abundant digital content and widespread access to the power of the ‘crowd’[5].

Cedefop’s European skills and jobs survey (ESJS) has highlighted that over 4 in 10 adult EU employees recently experienced changes in the technologies they use (machines, ICT systems)[6]. But even though such proliferation of digitalisation, robotisation and artificial intelligence (AI) is already disrupting the world of work and society at large, futuristic assessments of the impact of technology on jobs are sometimes more fiction than science.

We can get some informed insight on this age-old question by using new survey data, such as the ESJS, which contains novel information on the tasks and skill needs of different jobs. Using this Cedefop survey, it is possible to estimate the extent to which EU jobs are potentially ‘automatable’[7] by utilising detailed job descriptions for (a subset of) EU employees and information on their jobs’ skills needs. Employing text mining and machine learning analytics, it highlights that popular concerns about widespread elimination of jobs by machines are likely to be exaggerated[8].

How many EU workers are at risk of automation?

Focussing first on a set of detailed occupations for which we ‘know’ their automatability (based on expert assessment), it is found that jobs prone to automation are more likely to entail frequent execution of routine tasks and require knowledge of advanced numeracy and specialised skills. By contrast, jobs facilitating worker autonomy and demanding a higher degree of planning, team-working and customer-service skills are less susceptible to replacement by machines. 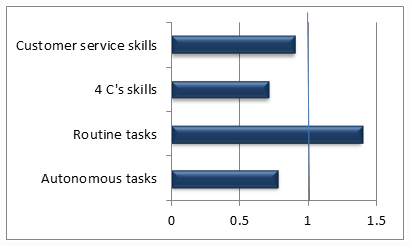 The analysis subsequently predicts the risk of automation for all occupations, based on their own tasks-skills profile. It is revealed that about 14% of jobs in the EU labour market - corresponding to approximately 31 million adult workers - face a very high risk of automation[9]. But 4 in 10 jobs also have a non-trivial chance of being somewhat transformed by automation – while they may not be completely automated, some of their tasks and skill needs will probably change to complement newly adopted technologies.

Figure 2 Share of EU workers at risk of automation 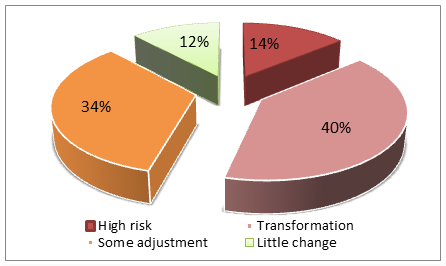 But this is not the end of the story. While the introduction of a new technology and employee displacement by robots may be technically feasible, moving to actual diffusion in production methods and workplaces is dependent on employers’ incentives (as well as the wider socioeconomic and regulatory environment). ESJS data reveal that many employers in high risk jobs actually take active steps to facilitate their staffs’ adaptation to technological change, by financing their continuing training.

Extracting such committed employers from the total figure results in a final estimate of about 8% of EU jobs – approximately 18 million workers – ultimately faced with a very grave risk of automation.

Who are mostly affected?

This risk of job displacement by machines affects mostly males and lower-skilled workers, with gaps in their digital and transversal skills. It is prevalent in privately-owned, larger-sized companies that fail to provide remedial training to their employees. The same holds for workers in crafts and elementary jobs and plant and machine operators, in contrast to managers and professionals and those employed in social and personal services, education and health and cultural industries.

Being in a high risk job entails significantly negative consequences for employees. They generally have higher chances of being less satisfied with their jobs and fear that they will lose their jobs, or that their skills will become outdated in the near future. Employees in highly automatable jobs also receive about 3.5% lower wages per hour, relative to comparable workers facing lower degrees of automation risk. 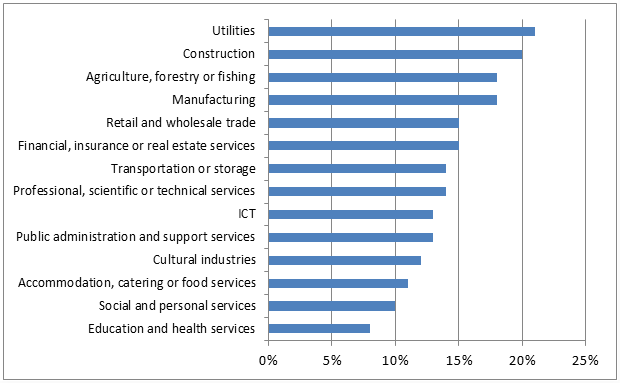 Are we prepared for the future of work?

The debate regarding the extent of job destruction due to automation involves a high degree of uncertainty and speculation. But what is certain is that policymakers face a key challenge in ensuring that individuals can transition from a ‘semi-analogue to a digital world’ with as little disruption as possible. Modernising lifelong learning systems and adopting forward-looking skills strategies, are admittedly a critical parameter of the equation to ensure equitable access to the opportunities of the i.4.0 era.

Cedefop has recently risen up to this challenge by setting up a new ‘Digitalisation and Future of Work’ thematic activity. It aims to provide a more nuanced narrative and informed insight into the opportunities made available by ongoing technological advances. A key output of this initiative is the launch in 2019 of the 2nd European skills and jobs survey, which will collect new data on the impact of digitalisation and automation on EU workers’ jobs and skills!

([1]) Based on an ancient Greek myth, Talos, a bronze android or automaton, was designed by the god Hephaestus to protect the realm of King Minos, by repelling invaders. Since then many other humanoids, such as the Golem of Prague, Blade Runner and Exterminator, have been thought to constitute threats to humanity.

([2]) As suggested by a 2013 University of Oxford study by Frey and Osborne ‘The future of employment: how susceptible are jobs to computerisation?’; also see World Economic Forum (2018), Future of jobs report 2018 .

([3]) According to a 2017 Eurobarometer survey https://ec.europa.eu/digital-single-market/en/news/attitudes-towards-impact-digitisation-and-automation-daily-life

([8]) Arntz et al., (2016) The risk of automation for jobs in OECD countries; Nedelkoska and Quintini (2018) Automation, skills use and training