Greece: responses to the Covid-19 outbreak

Greece has met the challenge of the Covid-19 pandemic efficiently. Authorities have not only taken all the necessary measures to contain the spread of the virus, but they have also excelled in superb communication management since day one, building social trust and persuading citizens to embrace the imposed measures.

On 10 March, with 89 confirmed cases and no deaths in the country, the government, in cooperation with the Greek National Public Health Organisation, decided to suspend the operation of education institutions at all levels nationwide. As a response to the challenge imposed by school closures, the education ministry launched digital tools enabling distance learning and a specific web portal providing information for education and training programmes at all levels.

In the two-month period of the lockdown, teachers and trainers were supported both technically by the central technical team based at the education ministry and pedagogically through short-term training sessions in digital skills.

All schools (including VET) nationwide were swiftly provided with tablets and laptops by the education ministry; the initiative was supported by European funds and private donations. This equipment is used by teachers and learners to ease the implementation of distance learning. In the long term it will also contribute in enhancing learners’ digital skills. Priority was given to supporting low-income families, unemployed parents, single families, families with three children, families with many children or orphaned families, learners with special needs or excellent achievements. The equipment was distributed according to the number of learners and the existing technological equipment at each school; the specific number of tablets and laptops was subject to the total amount of donations.

This unforeseen situation has triggered cooperation between the public and the private to support the education system and equip Greek youth with the necessary digital skills for the 21st century. Based on the most recent data, broadband cover reaches 99.9% of households and 4G mobile network coverage reaches 97%. The vast majority of families with children have, at least, one smart phone and computer; they also have unlimited data connection to the internet. The Greek Government also gave access to digital classrooms via landline telephones, at minimal charge. Discussions were held with internet providers to provide further support to distance learning.

According to education ministry data, participation in distance learning was significant, with the number of leaners views rising by 70% on average per day. More than 112 000 teachers have managed hundreds of thousands of hours of live broadcasting in digital classes with over 1 096 311 learner views. The number of online courses per day peaked at approximately 41 000; in total there were almost 10 000 000 participations by learners in online courses. Priority was given to learners in the last year of upper secondary education, who are candidates for the nationwide university entry exams. All necessary measures were taken to enable them to attend online courses via livestreaming, aiming to achieve 100% participation.

Almost 1 200 000 learners and 200 000 teachers have registered at the Panhellenic school network and are using asynchronous distance learning platforms. Networks are constantly being upgraded to respond to the extremely high demand from both learners and teachers. From the beginning, all schools have been included in asynchronous distance learning. The education ministry’s platforms (Panhellenic school network, E- class, E-ME) and web portals providing digital education material (Photodendro, Aisopus, E-Books) are constantly being upgraded.

In less than a week after face-to-face learning was suspended (10 March 2020) 114 of the 124 public IEK launched or set up asynchronous teaching platforms and started broadcasting synchronous distance learning.

A significant number of courses in each department of tertiary education institution is in place, combining existing asynchronous teaching platforms with synchronous distance learning. Based on official data gathered by the education ministry from tertiary education institutions nationwide, the University of Crete and Charokopeio University offer 93% of their courses via distance learning; the figure for Patras University is 91% of its courses. 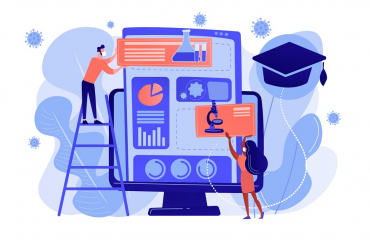 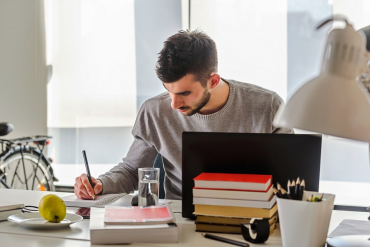