Methodology of the opinion survey on VET

Cedefop opinion survey on VET is a survey of Europeans (aged 15+) from the EU 28 Member States population, based on a representative statistical sample obtained from a multistage, random sample design. All interviews were conducted face-to-face in people's homes and in the appropriate national language, which assures better response rates. Data capture was by computer-assisted personal interview (CAPI) in those countries where this technique was available.

The survey design and implementation involved three phases over the course of 10 months: 120 cognitive interviews in 6 countries to test and improve the questionnaire (November 2015) , 840 interviews conducted throughout Europe to pilot the survey, 30 in each country (April 2016), 35646 face-to-face interviews in total with up to 2200 interviews in a single country (1-29 June 2016).

Details of the survey methodology can be found in the Survey Report and its Annex 1. 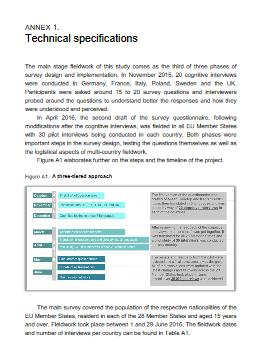