City Bus (number 01Χ και 01Ν): This service operates 24 hours a day and connects Thessaloniki Airport to City Center and the Central Coach Station. Route lasts approximately 40 minutes depending on the traffic. The cost of the ticket is 2 Euro and can be purchased on the bus from the automatic vending machines. You need to have the Euro coins as the machines don’t provide change from notes. Online information oasth.gr 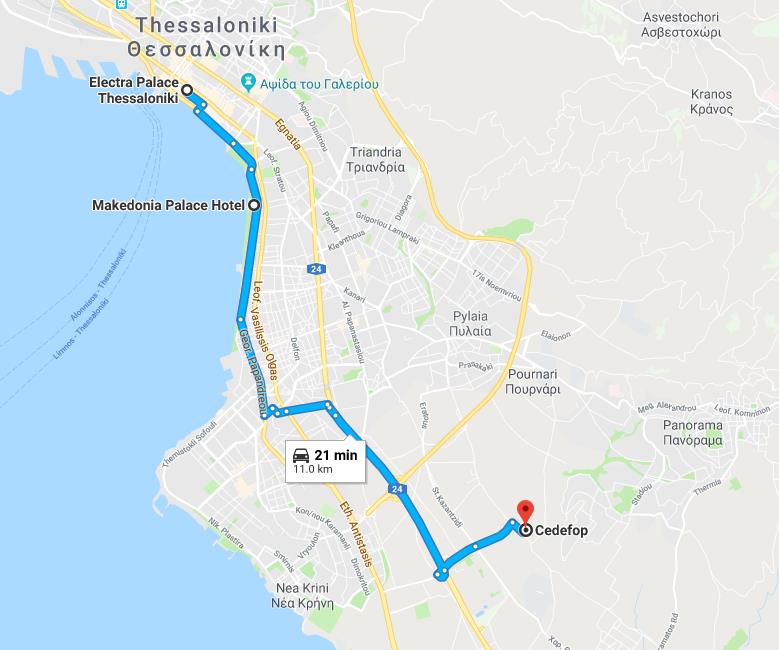 Secretariat desk during the Conference

Please do not hesitate to communicate with us should you need any help or assistance before or during the ICTAC 33rd meeting in the following mobile phone:

List of hotels with negotiated special Cedefop rates (mostly under the EU rate) subject to availability. Please mention the code name : CEDEFOP upon reservation. Should have any problems please contact the event secretariat.

No costs, allowances and/or indemnities for travel and accommodation needs of representatives from the Community Institutions will be covered.

The traditional dinner will take place on the 16th May 2019 at 19h:30, at Tria Gourounakia tavern (within walking distance from most downtown hotels).

The cost per person is 35 euros and it will be handed upon registration to Ms Chryssa Zekou the first day of the meeting (16th May).

To ease the registration process, participants are kindly requested to have the exact amount.

Greece is CET +1 and 2 hours ahead of Greenwich Mean Time (GMT +2) throughout the year.

You won't wonder where to get a drink in a town with this many bars! Thessaloniki is by far the liveliest city in Northern Greece, maybe even the whole country. Most of the bars are situated at the old seafront (Nikis Ave.) and around, many of the taverns are either downtown or in the old city (kastra). You can also find numerous bars and taverns at Krini, an area in eastern Thessaloniki, or you can visit the bars located in the big shopping centers just out of the city en route to the airport. You can find also a lot of nightclubs, bars and restaurants in Ladadika, the neighbourhood with the old warehouses next to the port.