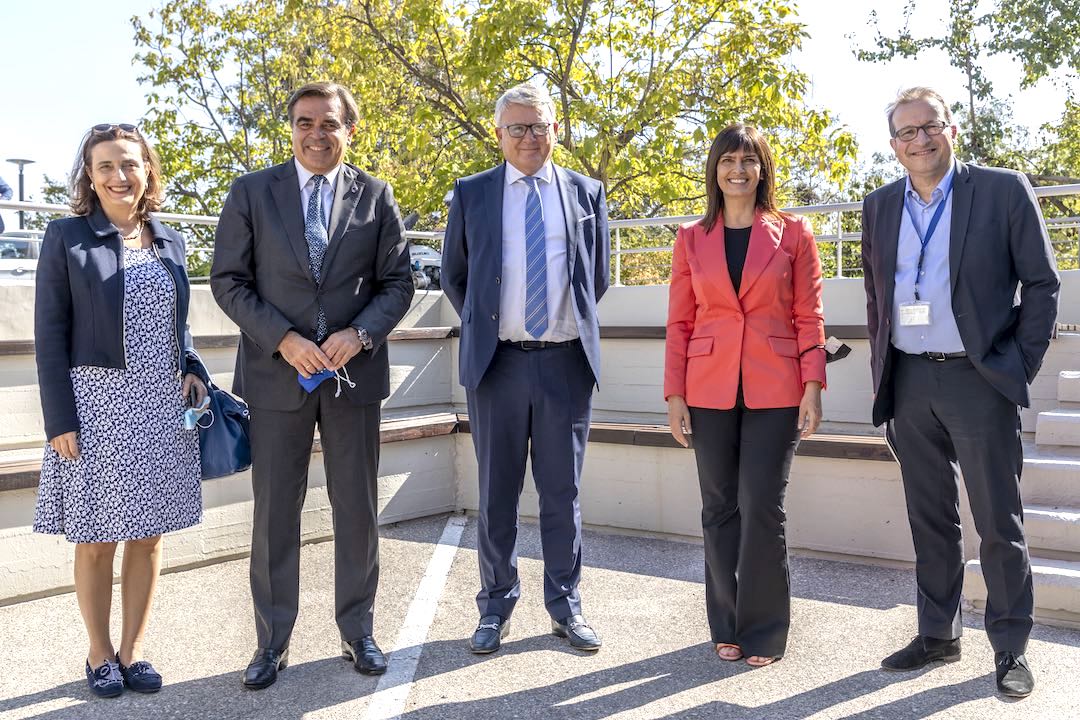 A high-profile visit to Cedefop’s headquarters has highlighted the European Union’s determination to pursue policies that bring vocational education and training (VET) centre-stage as a crucial tool for Europe’s post-pandemic recovery.

European Commission Vice President Margaritis Schinas and European Commissioner for Jobs and Social Rights Nicolas Schmit visited Cedefop’s headquarters in Thessaloniki, met with the Agency’s management and staff and spoke of the significance of Cedefop’s research and policy support for the future of the world of work and education in Europe.

Cedefop Executive Director Jürgen Siebel said that VET is not a repair shop for society but a tool for resilience and innovation. ‘The skills revolution that we are aspiring to requires more than just funds, it requires a concerted effort and a comprehensive strategy,’ he added, welcoming the Commission’s policy focus on skills and VET.

Deputy Director Mara Brugia referred to the two ingredients that enable Cedefop to deliver value for policy-making and planning, namely its proactive approach and its ability to connect and bring together people from different worlds – the labour market, the VET community and business.

Mr Schinas pointed out that the importance of Cedefop’s contribution is made evident by the joint presence of two members of the Commission at its premises, a rare occasion when it comes to agency visits.

Speaking about the ‘greening’ of the economy and digitalisation, the Vice President indicated that, while there is investment made available all-around Europe, there appears to be a shortage of people participating in reskilling to meet the requirements of the twin transitions. ‘Here lies the significance of your contribution, as Cedefop needs to keep supporting policy-making,’ he said.

Mr Schmit noted that several EU Member States are lagging in lifelong learning, and this is why the Commission has made skills a key area. ‘Revamping and amplifying our skilling capacity, the skills revolution, is a crucial element to sustain the technological and economic transformations that lie ahead,’ he added.

The Commissioner stressed the importance of networking to disseminate the knowledge gathered by Cedefop, such as the big-data mining that underpin the Agency’s skills intelligence project, concluding that ‘you help us make better evidence-based policies.’

The two members of the Commission, who were accompanied by the Head of the EC Representation in Greece Niovi Ringou, also addressed an extraordinary Cedefop staff assembly, which was the first hybrid event since the beginning of the pandemic.