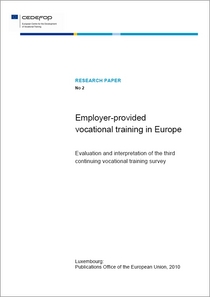 Despite the move to more skill-intensive jobs, the levels of continuing training offered by Europe’s enterprises are stagnating.

According to the latest figures from the European Continuing Vocational Training Survey (CVTS-3) covering the EU-27 and Norway, companies with 10 or more employees provided less training in 2005 than in 1999.  But why are employers not offering their workers more training? How many companies anticipate future skill needs? Is the sector or size of the enteprise more relevant? How useful and equitable are financial incentives, and other policy measures, in encouraging lifelong learning in the workplace?

While the overall picture in Europe is one of stagnation, some countries are doing better than others. A composite measure of performance divides countries into high, medium and low performers.