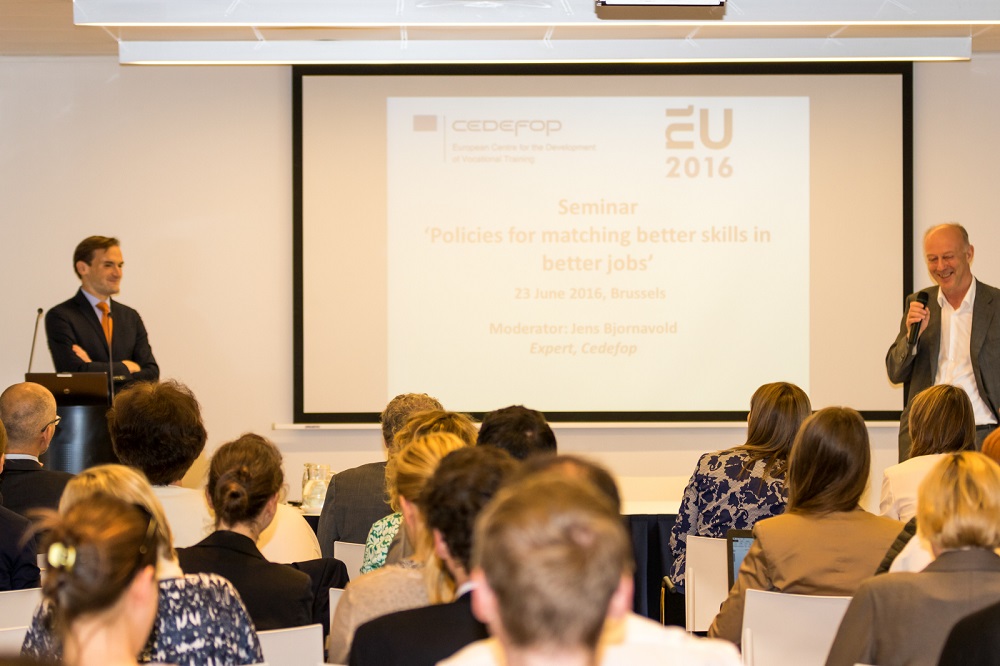 At a seminar jointly organised by Cedefop and the Netherlands EU Presidency on 23 June in Brussels, experts and stakeholders from around Europe discussed policies for matching better skills in better jobs.

The event was an opportunity to disseminate to European stakeholders the main findings of Cedefop's ongoing research on skill mismatch, most prominently the Cedefop European skills and jobs survey (ESJ survey), carried out in 2014 across approximately 49 000 EU adult employees.

Mirko van Muijen, Head of Education at the Dutch Permanent Representation, welcomed the 50 participants from 22 Member States, the European Parliament, the European Commission and other organisations.

In her opening speech, Cedefop Deputy Director Mara Brugia said that skill mismatch has a cost for individuals, enterprises and the whole of society.

‘It would be too simplistic to think that the issue can only be solved by improving education and training,’ argued Ms Brugia, adding: ‘Even if education reforms are perfect, that will only solve the issue of young graduates and not the one of people who are already in work. Therefore, we need to have policies to support on-the-job training. We also need a holistic approach to skills governance which combines different policies, including social and immigration policies’.

Cedefop Head of Department for Skills and Labour Market Pascaline Descy highlighted that, even though many policy-makers have focused in recent years on the notion of matching people's skills to jobs, this static view of the world is likely to be misguided.

But the survey also highlights that about 40% of employees who were matched in their previous job moved to a state of having 'mismatched' skills in their new job. About 20% decided to move to a job where their skills were below those needed, which is indicative that some people make conscious choices to move to demanding jobs even if they have skill gaps. The reason that some skill gap can be a good thing in this case is because such jobs are dynamic and offer ample skill development opportunities for the individual.

Cedefop expert Konstantinos Pouliakas presented Cedefop's research on skill shortages from the employer perspective. He highlighted that it is critical to be able to distinguish whether employers’ reported difficulties in finding talent are due to a genuine lack of skills in the labour force or because of issues such as uncompetitive wage offers by firms. This is crucial for being able to allocate scarce resources to the most effective of active labour market policies and vocational education and training (VET) programmes.

Mr Pouliakas highlighted that since 2006 EU countries have experienced divergent experiences in skill mismatch. Few EU countries have moved towards a situation of widespread skill shortages, whereas most have seen their recruitment difficulties subdued as unemployment has risen markedly. Nevertheless, since 2011 many EU economies are shifting towards a situation of higher recruitment bottlenecks coinciding with falling unemployment rates.

Professor Ken Mayhew of SKOPE, Oxford University and Maastricht University, corroborated Cedefop’s findings by arguing that evidence from the UK shows a marked divergence between the type of degree needed to be hired and the degree needed to actually do the job. He said that in most cases the true question is whether hiring a university graduate is better than hiring another graduate from an upper secondary VET school. In some cases, he added, evidence shows that an apprentice can be more productive than a university graduate from an unrelated field, so the true issue for policy is to focus on when and what type of skill mismatch is costly for labour markets.

Dan Andrews, senior economist of the OECD, presented research on the relationship between skill mismatch and labour productivity. He showed that there is a strong negative relation between the incidence of overskilling and productivity in OECD countries. This can be explained by the fact that there are important reallocation effects – firms that hire overskilled workers prevent those skills from being used by other firms in the economy.

He showed evidence that public policies such as easing product market regulation and housing policies can be key to enabling more effective labour reallocation across firms in the economy. This could have marked beneficial effects on labour productivity of some OECD economies – for instance, skill mismatch can account for about one-fifth of the difference in labour productivity between the US and Italy.

Cedefop expert Jasper van Loo spoke of the need for synergy, while European Commission's Director of Skills Detlef Eckert focused on the implementation of the skills guarantee, which forms part of the Commission's New skills agenda for Europe.

You can find a continuous stream of information on the ESJ survey on the Cedefop website.

A wide range of indicators on skill use at work and skill mismatch, including population breakdowns, based on the Cedefop ESJ survey have been uploaded on the 'Matching skills and jobs' section of the Skills Panorama website.

Skills Panorama is being developed so that data on current and anticipation labour market trends, derived from Cedefop's skill forecasts and the ESJ survey, can be effectively translated to the audience in a reliable and smart way.