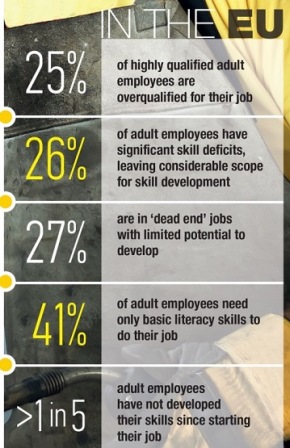 Many of these workers are professionals and technicians occupied in fast-evolving sectors, such as ICT and financial services. But change does not only affect high-skilled workers. The majority of employees in semi-skilled occupations have also seen their jobs require a greater variety of tasks since they started them.

Cedefop Director James Calleja says: ‘Developing the right blend of technical and soft skills in high-quality initial vocational education and training (IVET) programmes is essential for keeping up with job demands, but VET cannot stand alone in the fight against skill mismatch. Skill mismatch is two-sided; people need to have the right skills for the job, but good jobs can be enablers of long-term careers.’

Many of the skills European workplaces need are in fact not learned at school but informally at work. Good jobs that provide opportunities to learn are a sign of a healthy labour market. But Europe needs more of them.

The recession that followed the 2008 financial crisis reduced not only the number of jobs, but also the number of good jobs available. More people across the EU have had to take up positions below their qualification or skill level. Cedefop’s survey finds that a quarter of tertiary education graduates in Europe are overqualified for their job.

Many new jobs are temporary; although this can act as a stepping stone to employment, it can also limit skill development. Cedefop’s survey observes that the unemployed tend to return to the labour market more frequently in temporary roles that require fewer skills and offer fewer learning opportunities. Although having a job is better than no job, accepting a bad-quality job may compromise skill formation and scar one’s future.

The survey also finds that more than one in five adult workers have failed to improve their skills since starting their job; most of them are in dead-end positions with limited opportunities to use and develop their skills. Some 41% of EU jobs only need basic literacy skills, while 58% only need basic numeracy skills. In this technological age, 33% of adult employees need only basic or no ICT skills to do their job.

Developing skills that bring competitive advantage requires investment in training, but also the design of good jobs that can harness people’s skills. ‘Organisations have a significant degree of control in crafting autonomous and learning-intensive jobs, which use and cultivate workers’ skills better,’ say Konstantinos Pouliakas and Giovanni Russo, Cedefop experts who designed the survey. The survey finds several sectors to be more likely to underuse skills, such as retail and sales, accommodation, catering and food services, transportation and storage, cultural industries and social and personal services.

Europe needs more jobs, but we may only prolong the economic crisis legacy if people do not have good jobs in which to use and further develop their talents and skills.