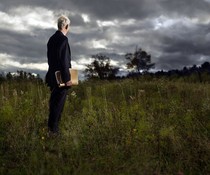 The Cedefop/Photomuseum Prize 2010 has been awarded to Eileen Kennedy (US) for her collection ´Beyond Success´. The biennial prize is awarded jointly by Cedefop and the Thessaloniki Museum of Photography on the theme of working and learning, and comprises a 5000 euro cash prize and an exhibition of the winning entry.

This year, 107 photographers from 22 countries took part in the competition. Second and third place went to George Karaelias (Greece) and Manuel Capurso (Italy). The award ceremony took place on 9 June at the Archaeological Museum of Thessaloniki. Theodora Tzakri, Greek Vice-Minister for the Interior, Decentralisation and E-government presented the award.

An exhibition of the winning entry of 2008, ‘Out on a limb’ by Myrto Papadopoulos, opened on the day of the ceremony at the Archaeological Museum and runs to 15 August.

Cedefop offers its congratulations to the winner and commended entrants, and its warmest thanks to everyone who entered the competition in 2010.