Brexit Disclaimer
This website as well as the publications and online tools accessible via this website may contain UK data and analysis based on research conducted before the United Kingdom’s exit from the European Union on 31 January 2020. EU averages or other statistical parameters including the UK reflect the situation in the European Union before 31 January 2020 and should not be considered as representative of the situation in the EU thereafter. Any data or information pertaining to the UK will be gradually phased out from Cedefop’s website, publications and online tools, as ongoing research projects with the United Kingdom’s participation are concluded.

17/01/2013
Belgium: what comes after the Abitur ( )? School-leavers have very clear ideas about the future!
Tipo:
Articles

The Belgian i-COMP project focused on the extent to which the competence concept is integrated into daily practices of 31 European public employment services (PES) and 35 vocational education and training organisations (VET). The i-COMP project (funded by ESF) was run by the VDAB (Flemish Employment and Vocational Training Service) in partnership with SERV (Social Economic Council of Flanders).The results were presented at the i-COMP exchange event held in Leuven in September 2012.

To tackle the problem of the bottleneck economy, the labour markets in Belgium must expand to include workers over 50. The VDAB project Together into the breach for 50+ initially extends the availability of employment counselling from 50 to 52 and subsequently from 50 to 55 years of age.

The Flemish Ministers for Employment and Education have concluded a cooperation agreement with their Brussels counterpart, the Minister for Employment, to bolster interregional mobility among jobseekers between Brussels and Flanders. 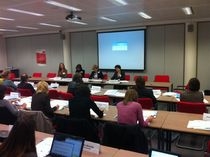 Demographic change in Europe will have a major impact on its society and economy, but few companies are actually adapting their human resource practices to the ageing of the workforce. Despite encouraging results from initiatives that show the value of investing in ageing workers, better access to and more participation in lifelong learning remain major challenges. What can policy-makers do to encourage workers, employers and educators to take action? What are the key factors in successful active ageing policies? Where are barriers to investment in an ageing workforce, and what is its potential?

The European Inventory 2010 provides a unique record on how validation is already being used at national, regional and local level to address issues relating to lifelong learning, employment and social exclusion.

Cedefop and the European Commission are jointly organising a two-day international seminar on learning later in life and the impact of investing in an ageing workforce.