Brexit Disclaimer
This website as well as the publications and online tools accessible via this website may contain UK data and analysis based on research conducted before the United Kingdom’s exit from the European Union on 31 January 2020. EU averages or other statistical parameters including the UK reflect the situation in the European Union before 31 January 2020 and should not be considered as representative of the situation in the EU thereafter. Any data or information pertaining to the UK will be gradually phased out from Cedefop’s website, publications and online tools, as ongoing research projects with the United Kingdom’s participation are concluded.

The Government adopted the Industry 4.0 initiative in 2016, with a document prepared by more than 70 experts and under the scope of the Ministry of Industry and Trade. The initiative provides key information about the fourth industrial revolution and possible directions in preparing the economy and society for future technology changes. 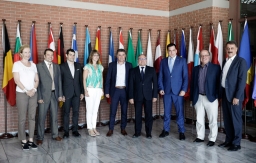 MEPs Tomáš Zdechovský and Thodoris Zagorakis visited Cedefop in Thessaloniki on 10 July and were briefed on the agency’s work by Director James Calleja, heads of department and other staff.

With returning economic growth in recent years, companies in the Czech Republic have been facing a shortage of skilled labour. Labour supply does not match demand on the labour market and the practical skills of graduates entering the labour market are often insufficient.

The Ministry of Education, Youth and Sports (MŠMT) has prepared its reform of regional education funding, which is currently waiting the approval by the Parliament of the Czech Republic. The reform applies to schools governed by regions and municipalities (more than 90% of primary schools, 70% of secondary schools ([1])), including public VET schools. The reform does not apply to the funding of private and church schools.

In cooperation with its partners, and with the support of the Prime Minister, the Confederation of Industry of the Czech Republic (SP ČR) declared 2015 the Year of industry and technical education. Outcomes include systemic changes, sectoral agreements in selected industries, and more than 400 events.

The online platform www.koopolis.cz collects and presents high quality, up-to-date information on continuing education. Subtitled Education under one roof, the website is intended for all professionals in continuing education, from public administration, employment services and other educators to employers and NGOs.