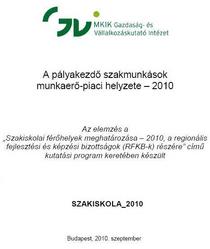 In 2010, the Institute for Economic and Enterprise Research of the Hungarian Chamber of Commerce and Industry (Magyar Kereskedelmi és Iparkamara, Gazdaság- és Vállalkozáskutató Intézet) conducted its third research on vocational schools in the country.

For the second time in a row, the research included modules to explore the labour-market situation and opportunities of career-starter skilled workers, their views on the vocation they had chosen and the job they held, as well as their integration into the labour market eight months after graduation from a VET school.

The survey focused on vocations which, according to the forecast of the Regional Development and Training Committees (Regionális Fejlesztési és Képzési Bizottság, RFKB), are expected to be in short supply in the labour market. The sample included close to 3 000 VET graduates who graduated in July 2009 and were trained in vocations in which labour demand was forecasted to be greater than supply.

The average age of respondents was 21,1 years of age. The dominant majority, 83 %, of them were men. This year, family background was also taken into consideration when examining VET graduates’ labour-market position, along with the students’ progress at school and regional factors. Family background was confirmed to affect labour-market careers, including the length of job search and the labour-market status acquired, also career-starter skilled workers’ decisions and opportunities to work in the trade they had chosen or change to another.

Although data from two consecutive years hardly allow the identification of trends, they nevertheless provide a basis for comparison.

The findings indicate some improvement in the satisfaction level among career starters, both with their school and their vocation. If given the chance to choose again, 60 % of respondents would go for the training that they had chosen, in the same school they had attended. 87 % of the respondents (compared with 84 % the previous year) claimed that they would like to work in their chosen vocation in the future as well.

With respect to practical training venues, respondents seem to be more satisfied than in 2009. Respondents were more positive as well when assessing the level of their salaries/income, too.

The results point to an improvement with respect to VET graduates’ language skills: 71 % of the respondents (compared to the 60 % a year ago) said that they can make themselves understood in a language other than Hungarian, referring mostly to English and German.

As much as 74 % of VET graduates felt that the share of theoretical and practical training was balanced. This indicates an improvement of 11 percentage points when compared with the respective results of 2009.

The data indicate some deterioration in the labour-market position of young skilled workers from 2009 to 2010: the share of the employed among respondents decreased from 45 % to 39 %, while the proportion of unemployed increased from 20 % to 24 %, most probably due to the economic crisis. The average length of the job search period has increased. The reasons behind these negative developments include the negative consequences of the economic crisis, especially a sharp decline in labour demand. A significant part (49 %) of respondents have never had a job; most of them were students or unemployed at the time when the survey was conducted.

A negative change was noted in the extent to which respondents were able to apply their knowledge in practice at the workplace. The majority (61%) of respondents reported that there were some skills which they did not learn at school, therefore they had to learn them at the workplace, and only 39% felt that at school they had acquired all the necessary skills.

Almost the same proportion of VET graduates (62 % in 2009, and 63 % in 2010) indicated plans to pursue further training. The difference was in the school type they would choose for future studies: in 2010 the most popular school type for further studies was grammar school (32 %, compared to 17 % a year before) and considerably fewer people (19 %) consider going to college/university than in 2009 (34 %).

There was an increase in the number of VET graduates who were planning, 8 months after their graduation, to change their workplace: compared to the 14 % last year, a quarter (25 %) of respondents indicated their intention to find another job.

The results of the studies both years suggest that employment prospects, launching an enterprise or pursuing further studies are closely related to achievement/performance at primary school and especially at VET schools. Those who were able either to find employment within 8 months after graduation or set up their own enterprises or perhaps to continue their studies, had had better grades at school than those who ended up unemployed or those who have temporary jobs only.

In the research, special emphasis was paid to those who left the vocation they had initially been trained in. The study found a slight decrease in the proportion of those who found employment in a field corresponding to their training. In 2010, this proportion was 67 % among those who graduated from vocational schools, as opposed to 70 % the previous year. This suggests, the study concludes, that an important task for VET should be the teaching of learning skills to enable trade-changing VET graduates to learn new skills in their new job.

In particular, the following trade groups saw a decrease in the exit rate: electro-technician, food industry and catering-tourism. However, career-starting skilled workers tended to stick to their vocation if it was in trade and marketing, business administration and in transport.