Brexit Disclaimer
This website as well as the publications and online tools accessible via this website may contain UK data and analysis based on research conducted before the United Kingdom’s exit from the European Union on 31 January 2020. EU averages or other statistical parameters including the UK reflect the situation in the European Union before 31 January 2020 and should not be considered as representative of the situation in the EU thereafter. Any data or information pertaining to the UK will be gradually phased out from Cedefop’s website, publications and online tools, as ongoing research projects with the United Kingdom’s participation are concluded. Data coming from UK were collected, processed and published before its withdrawal from the EU. Therefore, EU averages contain UK related data up to 2019.
What is the VET toolkit for tackling early leaving?

This Europe-wide toolkit is inspired by successful VET practices is a result of Cedefop's work on tackling early leaving from education and training aiming at:

Collapsible section
Collapsed by default
Who can benefit from the toolkit?
Policy-makers and practitioners, working in a ministry, VET school, company, guidance centre, public employment service, social service, or youth organisation, looking for ways to:
Register to stay tuned for news and forthcoming events about tackling early leaving.
Collapsible section
Collapsed by default
What resources are available?

Collapsible section
Collapsed by default
How to use this toolkit?

You can use the toolkit to:

Integrate the following activities in your workshop, training session or event to promote reflection and good practice on how to tackle early leaving from education and training. The activities, available here in MS word files, can be downloaded and used independently and can be tailored to your audience. Each activity includes a set of questions to trigger reflection and discussion, guidance for consulting the relevant toolkit sections, and materials to help participants turn reflection into action.

The toolkit content is a result of Cedefop's work on tackling early leaving from education and training and builds on the findings from a two volume Cedefop study, specifically on its analysis of:

The development of the toolkit was under the responsibility of Irene Psifidou, Expert at the Department for Learning and Employability, headed by Antonio Ranieri and guided by an expert panel composed of six members that combined research and practical knowledge of early leaving and VET: Béatrix Charlier, Paul Downes, Marie Gitschthaler, Erna Nairz-Wirth, Becci Newton and Ward Nouwen.

Currently, the toolkit is managed by a team comprised from Irene Psifidou, Project Manager; Ioannis Katsikis, VET toolkit Administrator and Alexandra Farazouli, Trainee; all at the Department for Learning and Employability, Cedefop.

The toolkit was tested at several phases of its development through interviews with policy makers and practitioners involved in the design and implementation of measures to tackle early leaving from education and training. It was launched at Cedefop ‘Policy Learning Forum: VET as a solution to leaving education early’ in May 2017, and has since been presented in a variety of regional, national and international events. These events have allowed Cedefop to test the tool and use the feedback to improve it. The tool was last updated in early-2019. A new enriched edition was launched during the Cedefop - LLLP Policy Forum: "What role for Community Lifelong Learning Centres? The potential of one-stop-shops to prevent youth at risk from disconnecting" which tοοk place in May 2019 in Brussels.

The ‘Reflection tool for policy makers’ is based on a matrix of structural indicators developed by Paul Downes. This matrix of indicators built on the findings of Cedefop’s research study and was developed in collaboration with the expert panel.

The selection of good practices is based on the review of measures with evidence of success conducted under Cedefop’s study. This review covered the following countries: Austria, Belgium, Denmark, Estonia, France, Germany, Hungary, Ireland, Italy, Luxembourg, Netherlands, Norway, Poland, Portugal and the United Kingdom.

The selection of quick wins was based on the factors identified by interviewees in Cedefop’s study as contributing to the success of measures. Quick wins were discussed with the expert panel that helped fine-tuning the selection.

Existing toolkits and tools were mapped as part of the development of the toolkit. The main sources were the outputs of EU-funded projects in the area of education and training and, as such, most of the tools identified were developed by consortiums of entities from several EU countries. The expert panel helped select the tools of the highest quality to be included in the Cedefop toolkit.

About the research study

The study was published in 2016 in two volumes:

Cedefop is one of the oldest EU’s decentralised agencies. Founded in 1975 and based in Greece since 1995, Cedefop supports development of European vocational education and training (VET) policies and contributes to their implementation. The agency is helping the European Commission, EU Member States and the social partners to develop the right European VET policies. Read more… 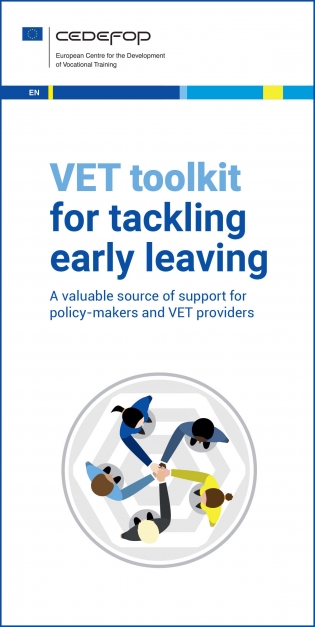