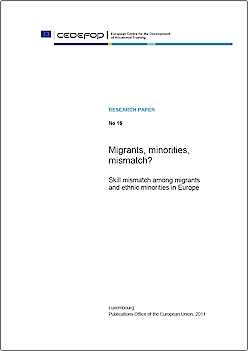 This report aims to increase our understanding of mismatch, and its impacts, among migrants and ethnic minorities in Europe. It reviews relevant international literature on the topic and looks at various aspects of labour-market performance of these groups. The focus is an empirical investigation of skill mismatch based on the European social survey. Important findings are, first, that migrants from outside the EU are disproportionately affected by overeducation, while ethnic minorities are affected by undereducation. Second, overeducation is higher in countries with low rates of training and a lower proportion of skilled workers while undereducation is lower where the incidence of training is higher. Finally, both forms of mismatch are greater for migrants educated abroad. Policy responses are needed: a focus on migrants from non-EU countries; an attempt to put migration in a more positive light than is often the case; developing and better implementing common standards for recognising qualifications obtained abroad; improving job access for both groups by supporting their competitiveness to apply for jobs; and encouraging employers to give people with a migrant background more job and training opportunities. Such policies could contribute to making better use of migrants’ skills and alleviating current and future skill shortages in Europe.