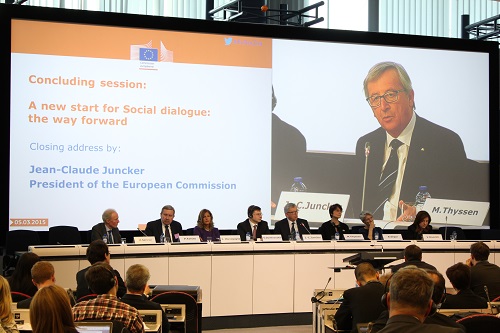 European social partners discussed with the European Union (EU) institutions concrete ways to strengthen the social dialogue in line with the renewed EU economic and social priorities at a landmark high-level conference organised by the European Commission in Brussels on 5 March. Cedefop Director James Calleja took part in the conference at which the agency also had an information stand.

European and national employers' and workers' organisations were represented in the gathering of more than 400 stakeholders.

Addressing participants, Commission President Jean-Claude Juncker affirmed the key role of social dialogue in dealing with Europe's challenges under the new Commission, adding: ‘Our aim is a job-rich growth which will make it possible for us to see many of our dreams come true’.

European Parliament President Martin Schulz said that ‘the European social model is part of the solution to the economic crisis.’ He argued that ‘if we want to assure a social Europe we need a social dialogue on a European level.’

Commissioner for Employment, Social Affairs, Skills and Labour Mobility Marianne Thyssen stressed in her address: ‘I am really convinced that there cannot be a social market economy without a well-functioning social dialogue.’ She added: ‘We are committed to enabling the social partners to contribute to the cornerstones of the EU policy agenda.’

The Cedefop Director intervened at the workshop on skills, education and training needs in anticipation of a changing working environment, in which he stated that, in the context of the EU2020 and the Education & Training 2020, vocational education and training (VET) is central to transforming an economic crisis into a long-awaited educational reform.

In the context of creating jobs and greater synergy between the world of work and education, it is necessary to invest in educational reform from elementary to tertiary level, added Mr Calleja.  He stressed that Cedefop is in the forefront of providing social partners and Member States with the state-of-play of VET in Europe.

Mr Calleja concluded: ‘The monitoring report published earlier this year of the Copenhagen process which Cedefop coordinates with the Commission illustrates progress has been achieved since 2002 but a lot more needs to be done. Towards 2020, there is general consensus that VET reform should focus on and strengthen work-based learning and apprenticeships, quality assurance in VET, the acquisition of key competences in VET, access to different forms of learning and referenced qualifications as well as teacher training and more VET programmes which are industry-driven but also underpin an education for citizenship. ‘

The Cedefop Director met briefly with Commissioner Thyssen before she visited the agency’s information stand set up specifically for the conference.