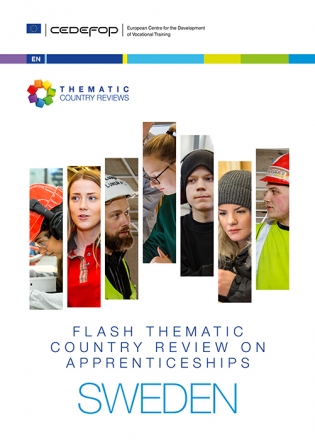 This publication is the final report of the flash thematic country review of apprenticeships (TCR) in Sweden.

Cedefop initiated the review which took place between June 2017 and April 2018 and looked at apprenticeship at upper secondary level. This report presents the key findings and suggestions for action to develop apprenticeship training in the medium and long term. The underlying analysis largely relies on information collected from different categories of stakeholders at different levels, and in-depth discussions with a national panel of experts. The report presents suggestions for action organised in two areas for intervention: rethinking the overall scheme design, clarifying its identity and selling point by making it more responsive to the labour market; and at the implementation level, revising the responsibility allocation and ownership balance to engage employers more.
Since 2014 Cedefop has carried out thematic country reviews on apprenticeships in Greece, Italy, Lithuania, Malta, and Slovenia. Cedefop is currently reviewing apprenticeships in Cyprus and Croatia, and has piloted a lighter version of the review in the French-speaking Community of Belgium, in addition to Sweden. The reports of the reviews carried out in Cyprus, Croatia and French-speaking Belgium are expected in 2019.