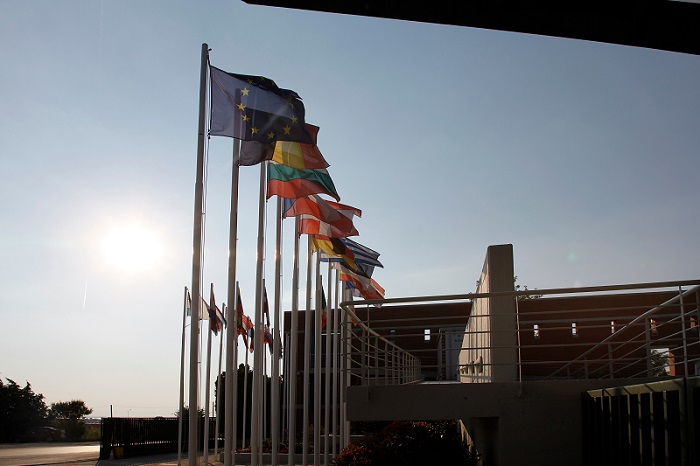 Current and former staff give their opinions on Cedefop, its history and role, and on vocational education and training in general. The page will be updated throughout 2015, so come back to read more testimonies!

Having joined Cedefop in 2011, I am considered one of its ‘youngest’ staff members. Change has been the operative word these past three and a half years, at many levels: staff members have come and gone, services have been reorganised, the building has been revamped, departments have been restructured, and projects are being constantly evaluated and realigned. All this has culminated in Cedefop’s most recent and most important change: its strategic shift towards labour-market-related objectives and greater involvement with individual Member States and citizens. As with any major organisational change, there is a feeling of uncertainty among staff about the future, about whether we’ll be able to accomplish all we’ve set out to; but this is largely balanced out by the feeling of excitement new prospects inevitably evoke. This constant change may be what accounts for the impression I’ve had of Cedefop ever since I started working here: that it is an active organisation, full of energy, taking multitasking to a new level. It may be thwarted by bureaucratic limitations at times (perhaps more often as time goes by) but only because there’s so much we want to do and we are constantly trying to find ways to do more. And this is what keeps Cedefop young: the desire of its people to do more, to research more, to understand more, to help more, to offer more. To my mind, Cedefop is a 40-year-old agency with a 20-year-old heart.

I worked for Cedefop for 36 years, serving in various departments; by far the longest period was in Cedefop’s Translation Service, coordinating translation work done internally and externally. When I joined in 1977, there were nine Member States and six official languages. In those days a small team of experts working on a project could usually cover all languages themselves. The resulting studies and reports were generally translated and published in the six languages. Working for 18 years in Berlin, I experienced life in a divided city and witnessed the fall of the Berlin Wall, and 18 years in Thessaloniki opened up a whole new culture for me. And I gained much from working in the multicultural and multilingual environment of Cedefop.

Cedefop’s value is its people and the knowledge they generate. I have seen our work on the study visits programme inspiring people from all over Europe who turned to us to understand what happens in other countries and look for ways to improve their own education and training systems and practices. Cedefop has broadened my horizons and has given me opportunities to expand my expertise by working with colleagues on a number of topics such as quality in vocational training and development of qualification frameworks. This capacity of bringing together expertise from several areas is what distinguishes Cedefop in the European VET and skills landscape. In addition, hard-working colleagues who are ready to cooperate, discuss and challenge new ideas make Cedefop an interesting organisation to work for.

The setting up of Cedefop was something new for the Commission. The difference in size of the two organisations and the complexity of procedures required adaptations. As an example, on the only occasion when our Management Board met for two days, at the end of the first day the board requested a summary of the discussion the next morning. A normal request, probably, in Brussels. Director Carl Jørgensen and I sat down after dinner and drafted the required documents in English. I translated the text into French and German and typed all three languages.

Did you know about this Christmas card, drawn by Cedefop kids? It represents very well an ideal for most of us in Cedefop: work for the European citizen. Enabling European citizens to get the training they need for doing the job they will enjoy to do; help fight unemployment. I feel proud to be part of concrete actions like Europass and study visits (a pity study visits have been closed down).

Berlin, 1984: at this point, Cedefop is still a young agency. After 12 years in the private sector, I was lucky enough to be offered a job at Cedefop. This was a new experience for me; I was living abroad, in an unfamiliar place, and I was working in a European agency. Up until 1998 when I left Cedefop, I always felt I was making a useful contribution, and that I was part of a large family: the Cedefop family, on the one hand, and the European family, on the other. And that is an experience that I certainly do not regret.

Vienna, spring 1992: It was during a programme preparing civil servants for EU entry that I came across Cedefop for the first time. We had to write a paper to complete this programme. My theme was: professional development of VET teachers in the EU. Vienna, Ministry of Education 1994, allocation of tasks for EU entry: ‘The study visits programme, that’s sort of continuing training. So, it fits in the VET teacher development unit. Would you take this on?’  I was asked.  This way, I became Austria’s first national liaison officer (NLO). December 1994: My first real encounter with Cedefop, then still located in Bundesallee in Berlin. It was at a meeting for future NLOs from Austria, Finland and Sweden, about to join the EU, and those from Iceland and Norway. Ducio Guerra was still in charge of study visits. Little did I know that one day my role as NLO would turn into my entry ticket to Cedefop.

When I joined Cedefop in 1987, coming from DG Translation in Luxemburg, it was also – to be honest – because it was located in Berlin at that time. Cedefop had its own translators and it was a new and enriching experience to work so closely with colleagues from the other Member States. Some friendships from those eight years stood the test of time and I’m extremely grateful I was able to be a part of it, even though for personal reasons I didn’t make the move to Greece.

In September 1999, when the move from provisional premises in Thessaloniki to our new building is complete and ‘business as usual’ is restarting, Mr Stavrou (then Deputy Director) realises that we have no new address. He asks me (then Head of Administration) for a proposal. I come up with ‘Europe’ for our new road and ‘Yannou Kranidioti’ for the connecting one, as the Deputy Minister of Foreign Affairs, with crucial contribution to Greece’s efforts to become part of the core of the EU, had just been killed in a plane accident. With Mr Stavrou’s consent, and the Mayor happily agreeing with the naming combination, we acted fast: the Mayor formally approved our written proposal and we thought we had an address. But we had forgotten that we also needed a street number. The Mayor could not predict how many plots or houses would be in this previously deserted area in future. He suggested over the phone ‘123, easy for all.’ To my question where will 121 or 125 be, he replied: ‘by the time we would need to consider that, none of us will be around anymore!’

I joined Cedefop in spring 1996 as a national seconded expert. It was an exciting time: Cedefop shaped its profile as an expert organisation and tied its cooperation with the European Commission, national ministries and researchers. The Centre was particularly challenged by its geographic position, at a time when broader use of information and communication technologies was just beginning. But, step by step, Cedefop became an essential part of the VET community. Since that time I have always appreciated its work and wish Cedefop all the best for the coming years!

I only want to speak about my dear colleagues Melissa, Annette, Julia and Dagmar who have passed away. I am writing these few lines in their memory and for us to remember how lively women they were: bright, nice, smiling and real professionals with great team spirit. People die only when we forget them. -

Cedefop has spent 20 years in Berlin and 20 in Thessaloniki. Thinking about these two periods, I wonder why it has been these two particular cities that have played host to it. They are unique, each deeply marked by the events of history. They are places where young Europeans like to come and take the time to live. Is there a link between the stimulus for thought, research and creativity (all of which is necessary to prepare for the future, which is the remit of training) and these unique urban settings where Cedefop, or the people forming Cedefop, have ended up putting down roots? What will the next 20 years be like for Cedefop? I hope it will have a promising and fruitful future.

In many ways this 40th anniversary issue has brought back memories I had forgotten. When I first came here I was fascinated by the multicultural environment and I loved it! I felt right at home. I hold memories of happiness and of bonding with my colleagues. But I also hold sad memories from colleagues that left us too early. I will never forget the support from my colleagues during my personal hard moments during my parents’ sickness. Furthermore, and very important, this place has supported my knowledge advancement in many ways, through courses taught in Cedefop or in Europe. Cedefop has trusted me and I trust Cedefop.

Cedefop or Thessaloniki… I don't know what I appreciated most in those best two years of my life when I worked and lived there. Cedefop was a real workplace, with both positive and negative sides. And Thessaloniki was a place like any other – there are no ideal places in the world. However, they are both very special in my heart. At Cedefop I was surrounded by incredible people. Yes, we sometimes didn't agree on everything, but I have not met such a positive and open bunch of people anywhere before or after. Also, we mattered as people to the employer. I know that some ‘Cedefopians’ wouldn't believe me, but I say that based on my other work experiences.

I’ve worked at Cedefop over the last 10 years as an expert and I had the chance to celebrate its 30th anniversary too. So, I’m really happy and proud to be part of the celebration of its 40 years. When I joined Cedefop, I was moving from a much bigger institution – the World Bank – which had 13 000 staff members, to Cedefop, which had 130 people. I’m amazed at the big impact of such a small institution in Europe. For me, Cedefop is my European family and I’m very happy to work here.