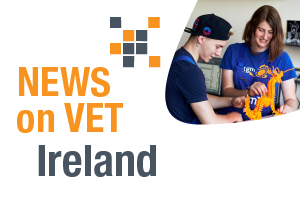 According to a report published in March 2021 on female participation in VET, Ireland has one of the highest female VET participation rates in Europe (higher than 60% of the total enrolment rate in many education sectors). The report is entitled ‘women in further education and training (FET)’ and was published along a magazine celebrating the 1 000th female apprentice, and sharing real-life stories of women choosing VET.

Choice and flexibility of provision are key factors for female participation in VET. Ireland has VET courses in various study fields, such as computer game programming, lab techniques, sports therapy, nursing studies, makeup design and supervisory management, etc., as well as a growing number of full- and part-time IVET and CVET courses.

Several VET options for school leavers (over 16 years old) are available. Each year almost 30 000 places are available across the Post-Leaving Certificate (PLC) sector as well as more than 20 000 other EQF level 4/5 vocational courses, such as traineeships, which are provided through the network of Education and Training Boards (ETBs).

FET supports females in many ways

In 2019, over 60% of the FET learner population were female. Over 60% of female enrolments were in education, health and welfare, business, administration and law, and generic programmes and qualifications.

The gender distribution in the highest levels of formal education demonstrated slightly higher education levels among females than among males upon enrolment.

Over 60% of enrolments in engineering, manufacturing and construction and ICT were 60% males. This reflects gender profiles in the Irish economy, with more females employed in the education, human health and social work sectors, and more males employed in the information and communication sector.

Non-national framework of qualifications (NFQ) aligned FET
Non-NFQ aligned courses in FET show interesting gender differences. Overall, 68.2% of enrolments and 67.3% of certified completions were males among the non-NFQ aligned FET courses. The field of study is an important factor in terms of gender. In engineering, manufacturing, and construction, males represented almost all enrolments and certified completions.