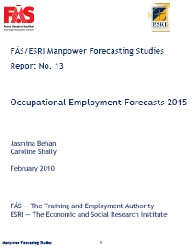 Changes are likely in the sectoral and skills mix of employment, according to an occupational forecast for the Irish economy for 2015.

The report is the latest in a series of manpower forecasts which began in 1991.

While employment in most occupations is expected to recover from the lows reached in 2010, the report says that the speed and the extent of recovery is likely to vary by occupation, with some occupations emerging with relatively strong employment growth and others failing to reach pre-recession levels by 2015.

The occupations expected to exceed pre-recession peak levels are concentrated at the higher end of the skill scale. They include professionals and associate professionals (technicians) in the areas of science, engineering, business services and IT. Occupations which, while growing after 2010, are not anticipated to recover to 2008 peak levels, include skilled building workers, production operatives, unskilled manual workers, sales assistants and clerks.

The overall employment level is based on the Economic and Social Research Institute’s latest forecasts for recovery, whereby employment in 2015 is projected to be some 80 000 below the peak level reached in 2008. However, given an estimated loss of 330 000 in employment between the 2008 peak and 2010, the projection implies that the economic recovery, which is expected to begin towards the end of this year, will generate 250 000 additional jobs between now and 2015.

Improvements in the educational profile are likely to continue during the forecasting period, with the share of third level graduates increasing in all occupations. By 2015, over 90 % of all professionals are expected to hold a third level qualification.