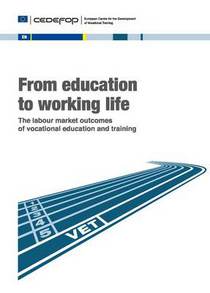 Comparing young graduates of 20-24 years of age shows a considerable gap in employment prospects between vocational and general streams. Almost 76% of 20-24 year olds with secondary or post-secondary vocational education were working compared with 67% for general graduates.

The findings of the study were presented at the EuroSkills 2012 conference, held in Spa-Francorchamps, Belgium, on 4 October.