17/12/2013
Survey of adult skills shows that ‘education is making a difference’
Typ:
Artikel

At a joint workshop on 4-6 December, Cedefop and OECD examined the first findings of the survey of adult skills (PIAAC), which show that literacy levels vary across countries and between vocational education and training (VET) and general education graduates at upper-secondary levels.

In June, the Ministry of Labour launched two strategic initiatives to provide vocational education and training, including apprenticeship and labour market/career guidance for a total of 5 000 youngsters around the country.

Starting in the autumn, a career education programme will be implemented in the majority of general education schools in Lithuania. 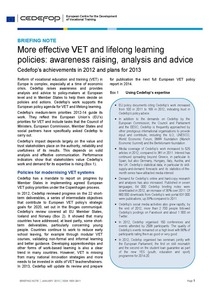 This briefing note presents Cedefop’s achievements in 2012 and provides an overview of the plans for 2013 for the following key areas: policies for modernising VET systems, careers and transitions, skills and competences.

17/01/2013
Belgium: what comes after the Abitur ( )? School-leavers have very clear ideas about the future!
Typ:
Artikel

The National Agency for Vocational Education and Training (NAVET) is responsible for an integrated information system (IIS) for data collection and storage. The agency manages and provides data and information on demand. The system is part of the e-government of the country.

Today everybody needs relevant competences to manage their working lives. Making informed choices and taking important decisions on education and employment is important not only in a transition phase (if moving from one education level to another or moving from school to the labour market) but throughout life.

Several major events on employment and education are being held this week in Cyprus, the country holding the EU Council Presidency. Cedefop is there, presenting its latest policy analysis and research findings. 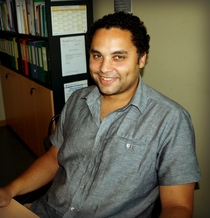 Pedro Moreno da Fonseca is our new project manager on lifelong guidance. He has worked on a wide range of issues related to vocational training and professional development, such as quality assurance, employment benefit policy assessment and comparative analysis of educational systems