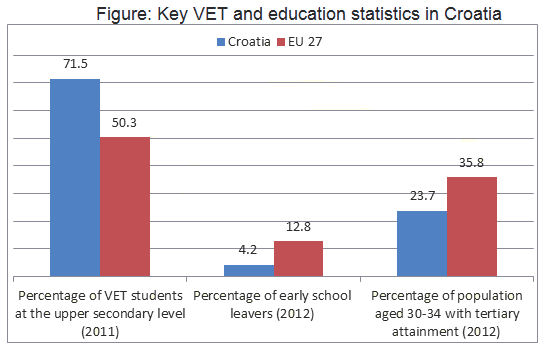 On 1 July 2013 Croatia became the European Union’s 28th Member State. To mark the occasion Cedefop has prepared a statistical overview on vocational education and training (VET) and lifelong learning in Croatia. Selected for their policy relevance and importance to achieving the Europe 2020 strategy’s objectives, the indicators quantify key aspects of VET and lifelong learning and relate Croatia’s performance to the EU average.

The indicators are those in Cedefop’s recently published country statistical overviews updated for Croatia with the latest available data.

Indicators in this area show participation patterns in initial and continuing VET training by various groups such as age, gender, educational attainment, working status and type. Participation patterns are used as proxies to indicate the attractiveness of VET as a learning option.

This area includes indicators on spending which, although data are difficult to capture accurately, can indicate VET’s role in skill development. It also include indicators that give insights into VET’s contribution to different educational and labour market outcomes and the extent to which employees believe that employer-provided training has enabled them to do their job better.

Indicators in this area aim to situate VET policies in a broader EU policy framework. Reflecting the focus on the labour market status of young people, the indicators include the two Europe 2020 strategy benchmark targets on early school leaving and educational attainment. 1 Persons aged 18 to 24 fulfilling the following two conditions: first, the highest level of education attained is ISCED 0 or 1, or 2 or 3c short, and second, the respondents declared not having received any education or training in the four weeks preceding the survey (numerator). The denominator consists of the total population of the same age group (18-24), excluding no answers to the questions "highest level of education or training attained" and "participation to education and training". Both the numerators and the denominators come from the Labour Force Survey.