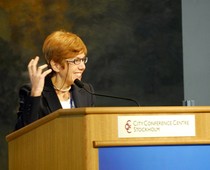 The current economic crisis broke more than a year ago. Though the effect on the various national economies has been uneven, no European country has been spared. Unemployment in the Euro zone is at a ten-year high, and no sector seems to be immune.

Together with the Swedish presidency, Cedefop has identified and examined the main policies that are being implemented across Europe in response to the crisis. Measures taken so far include:

The European institutions have also helped Member States by lowering conditional requirements and levels of mandatory co-financing for use of the European Social Funds. Such finance has mainly been allocated to adult learning (retraining and upskilling of workers and the unemployed) and apprenticeships.

May of these actions have been undertaken through new partnerships, notably between empoloyment and education/training ministries, regional authorities and public employment services. There is a new sense of urgency for joint action between the State, economic sectors and the social partners.

But its not all good news. In some Member States, not only companies but education ministries have cut their budgets; as a result teachers have been particularly hard hit.

Measures to contain unemployment have been partly successful - while GDP has fallen by 4,9% employment decreased by 1.9%. But some groups, such as the low-skilled, have been disproportionately affected. Most worryingly, youth unemployment is growing faster than general unemployment. In some countries it is three times as high - even though this segment of the population already participates in large numbers in education and training.

The danger of losing this generation may be the single most important argument for an accelerated, concerted effort to modernise VET systems, and to design and implement common EU tools - efforts on which Member States and the European Union have already embarked.

Beyond the crisis: our future needs are already here

In the past year, people with lower educational attainment have suffered an even more rapid loss of jobs than was the case before the crisis. Conversely, the employment rates of people with tertiary education continued to rise even through the second quarter of 2009.

But we should be careful about what conclusions we draw: this may simply mean that many highly-education people are taking on jobs for which they are overqualified - a common phenomenon in recessions which, if not corrected, eventually leads to slower growth.

In any case, qualifications cannot simply keep rising. They must become much more targeted. We have not always been successful in producing the skills profiles and competence the economy actually needs. Europe needs to find the right balance between raising the level of skills (especially with more vocational skills), widening skills across occupations, and offering skills that allow people to move across sectors. Moreover, training should cover every aspect of a skills profile for employability: generic skills, transferable occupational skills and specialised skills.

If training policy is to improve the prospects of Europe's citizens, economies and societies in the medium and longer term, where should it focus? Cedefop has worked intensively on this question, and some directions are already clear.

Ask not what Europe can do for training... ask what training can do for Europe

The crisis offers us an opportunity to focus on what lifelong learning really means and how much it can help our economies and societies. It is time to overcome the divisions between vocational, general and higher education, and integrate them in a single process of lifelong learning.

Europes goals are wide-ranging: international competitiveness; optimum use of human resources; research and innovation; social cohesion, including avoidance of polarisation and the successful integration of marginal groups; greater integration among the Member States themselves; the intelligent management of demographic decline.

Education and training represent societys investment in people - in their energy, abilities, skills and ambitions. Recognising and targeting skills and knowledge, strengthening mutual trust between actors in the labour market, and providing new forms of financing to encourage learning at all levels will contribute substantially to all of the considerable challenges Europe faces.

This text was based on the speeches and presentations made at the conference by Cedefop Director Aviana Bulgarelli and Deputy Director Christian Lettmayr.