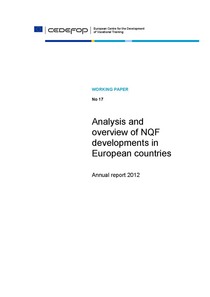 Cedefop’s fourth annual report on developments in National Qualification Frameworks (NQFs) in Europe confirms that these frameworks are considered a key way of making qualifications easier to understand and compare within and between countries. It has also found that such frameworks are increasingly used to encourage changes in education and training.

For instance, during 2012 some National Qualifications Frameworks opened up to include qualifications awarded outside the formal public system.

Most of the 36 countries working together on the European Qualifications Framework (EQF) – the 27 EU Member States, Croatia, the former Yugoslav Republic of Macedonia, Iceland, Liechtenstein, Montenegro, Norway, Serbia, Switzerland and Turkey have now agreed on the overall structure of their national frameworks. In addition to the fully operational frameworks in France, Ireland, Malta and the UK, ten more countries are now entering an early operational phase.